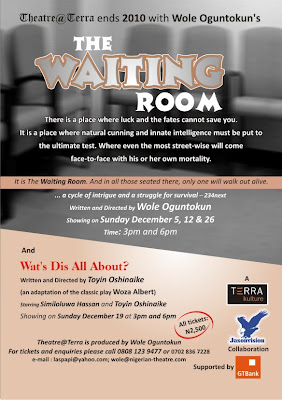 There is a place where luck and the fates cannot save you. It is a place where natural cunning and innate intelligence must be put to the ultimate test. Where even the most street-wise will come face-to-face with his or her own mortality.

A Stage Play written and directed by Wole Oguntokun.

(An adaptation of the South African Classic - "Woza Albert")

Written and Directed by Toyin Oshinaike .

All shows at 3pm and 6pm every Sunday in December. 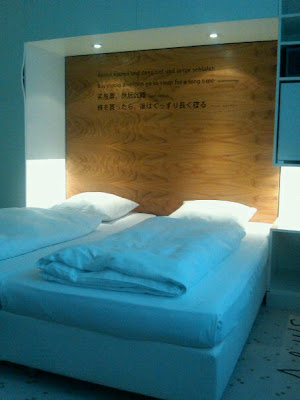 Will I ever blog again?; The Berliner and other Nigerian stories.

It's gotten really strange. From being known for compulsive writing, I barely put a word on ...ehr...cyberspace now.

What does one blame?

The column in the Guardian that is so good to/for me but demands a thousand words weekly?

STARCOMMS intrernet access or the lack of it? (This is a good one to lay the blame on. The Starcomms board should be lined up and flogged. N15,950 a month for no access is just nasty but they keep advertising and the Standards Organization in this country or whatever outfit should monitor this travesty lies comatose. By the way, Zain/Airtel/Econet/Vodacom/Buddie/Celtel is guilty of it too)

Well, I'll give consistent writing a shot once again seeing I'm some distance from Starcomms now and the internet's like lightning here.

I was leaving Berlin a few days ago when the airline attendant who was German told me my name wasn't on the passenger manifest. I told her to check properly and she got up, went to a telephone and sniggered into it in her, I assume, thick Bavarian accent, "Oluwole Oguntokun". She said it thrice, finding amusement in my name with her colleague at the other end of the line. I looked at her, 6am in the morning and said to her hearing and those of her colleagues around her, "That's the way your name sounds to me as well". She didn't get it at first so I repeated it. I saw she came to the phone a gentler person.

So much for a new century. The world is still riddled with bigots.
Posted by laspapi at 8:18 pm 9 comments: 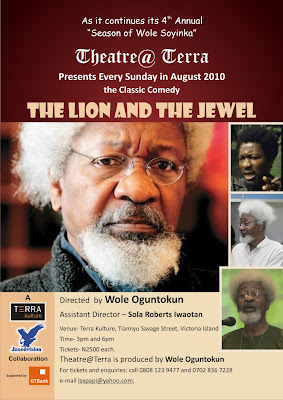 The 4th Annual Season of Wole Soyinka
Posted by laspapi at 3:43 am 2 comments: 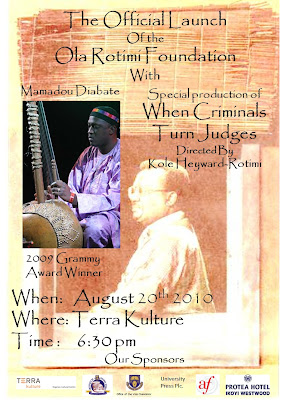 The Official Launch of the Ola Rotimi Foundation.
Posted by laspapi at 3:37 am No comments: 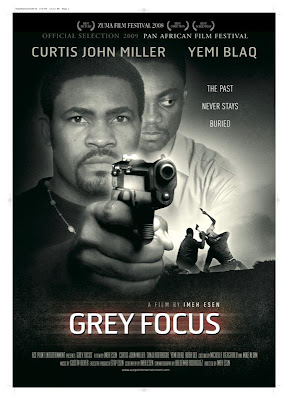 Showing at Silverbird Cinemas - Lagos, Abuja and Port Harcourt from Friday the 20th of August.
Posted by laspapi at 3:27 am No comments: 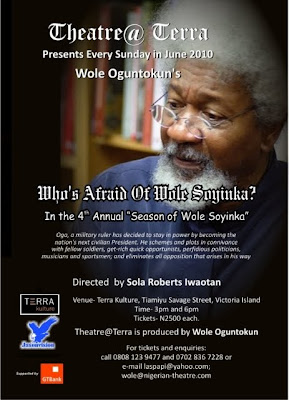 Oga, a military ruler has decided to remain in power by becoming the nation's next civilian president. He schemes and plots with fellow soldiers, get-rich-quick opportunists, perfidious politicians, musicians and sportsmen, eliminating all opposition in his way.

"Who's Afraid of Wole Soyinka?" is a humorous satire that chronicles some of the darkest periods in Nigeria's history.

Every Sunday in June at 3pm and 6pm. 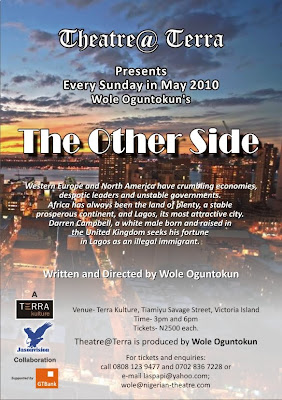 Western Europe and North America have crumbling economies, despotic leaders and unstable governments. Africa has always been the land of plenty, a stable prosperous continent, and Lagos, its most attractive city. Darren Campbell, a white male born and raised in the United Kingdom seeks his fortune in Lagos as an illegal immigrant.

Written and Directed by Wole Oguntokun