It was "Elder-Artsman" Steve Rhodes 80th birthday anniversary a few days ago. and the Committee for 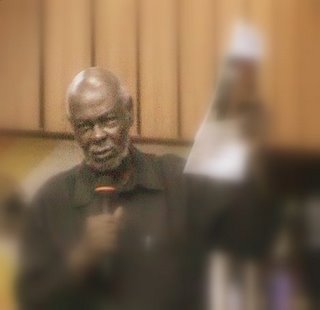 Relevant Art (C.O.R.A.) organized its 60th Arts Stampede in his honour. SR, Music Impresario and Broadcaster, and many other guests listened as a panel of producers from various Art genres debated on the topic: Between the Artist and the Market Place (The role of middlemen, promoters, programmers, media and the public).
Members of the panel included Kenny Ogungbe of Kennis Music, Otunba Solanke of Lantern Books, Bolanle Austen-Peters of the Arts Centre-Terra Kulture, Don Pedro Obaseki the film maker, myself- representing Theatre Producers and Tejuosho of Glendora book shops. Here, SR states his experience in the Arts after many members of the audience had given opinions (sometimes very heated ones).
Venue was the Conference Hall of the National Arts Theatre with the C.E.O. of the establishment, Dr. Ahmed Yerima, himself as part of the audience. Below are a few pictures. 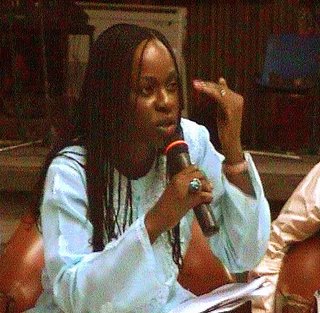 of Terra Kulture states her views on the difficulties encountered in marketing Arts and Craft.

Posted by laspapi at 12:59 am No comments: Links to this post 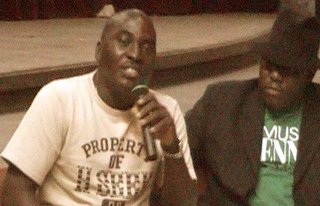 scathing attack on filthy lucre-minded producers of the Arts like myself who seek to ensure that its not all show but business as well.
Seated next to me like some Mafia Don is one-half of the biggest Musical partnership in Nigeria, Kenny "Ke-Ke" Ogungbe of Kennis Music. His partner, Dayo "D1" Adeneye was absent.
By the way, Kenny felt business was an important part of the show as well.

Odia Ofeimun, poet and essayist, gives his opinion at the Stampede. 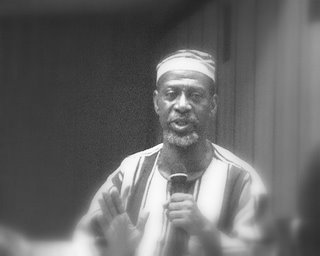 Posted by laspapi at 12:41 am No comments: Links to this post 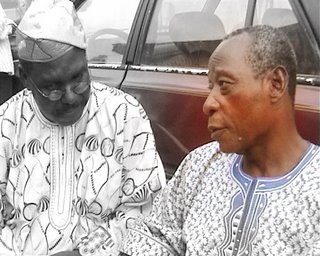 is recuperating from a stroke. Seated with Ben Tomoloju the playwright (in glasses), Orlando, now in his seventies, toured Europe and North America in his prime. The occasion was a 2-hour recorded documentary of this great man's life organized by the Committee for Relevant Art, C.O.R.A., in collaboration with Tunde Oladunjoye. Also in attendance were Akeem Lasisi of the Punch newspapers and Ropo Ewenla. I handled the camcorder. In the picture, Orlando at his home in Ipaja-Agege, sings a tune for Tomoloju, himself an authority on the musician.
Orlando's many hits, house-hold anthems in Nigeria, include "You be my lover", "Kangaru" and "America Special".
Orlando Owoh, born Stephen Oladipo Olaore Owomoyela told a tale of exploitation by many recording companies (Decca Records and Afrodisia), and by many young artistes ("No more Loss" and "Yinka Ayefele") who have "lifted" many songs of his without permission or acknowledgement.
His recollection however had many inspiring moments.

Posted by laspapi at 8:31 pm 2 comments: Links to this post

The Vagina Monologues- Back by popular demand.

Performances of Vagina Monologues will be on this Easter weekend.

Tickets are available from Quintessence (Falomo -Ikoyi) or can be delivered to you for free.

amy oyekunle
programme manager (KIND)
Posted by laspapi at 7:27 pm No comments: Links to this post 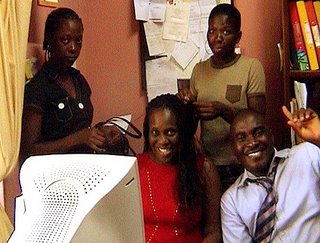 With Joke Silva (Jacobs) today as she combined having her hair braided and working on the desk top. Joke Silva (in red), one of Nigeria's finest actresses of all time, learnt her craft in drama school while in the United Kingdom . She has worked in radio, tv and drama for many years.
She was part of the Cast (and also the Producer) of the production of Eve Enslar's Vagina Monologues in Lagos about 3 weeks ago.
The drama is scheduled to be staged again on Friday and Saturday, April 14 & 15 at the Muson Centre, Lagos.
Joke acted alongside Nia Long (Big Momma's House) and Colin Firth (Bridget Jones' Diary- The Edge of Reason) in the 1999 movie "The Secret Laughter of Women". She is married to the Nigerian, Olu Jacobs who was in the movie made out of the international best seller, The Dogs of War, and Roman Polanski's Pirates. I'm the star-struck one with the tie.

Posted by laspapi at 4:37 pm 2 comments: Links to this post

I was driving down the St. Finbarr's College Road, Akoka this evening at approximately 5pm, when I saw a female accidentally run into the path of a commercial bus (the 14-seater Volks Wagens we call kombi here) coming from the direction I was facing. The bus must have been going at close to 50km per hour. The road had no divider and she ran right into the bus. The vehicle lost its windscreen, she rolled a distance of about 10 feet from the impact, and then lay still.

The conductor, hanging from the open door of the moving bus as they are wont to do here, fell to the asphalt too but was unharmed. My car and the one in front of me stopped in the middle of the road, feet away from the inert body of the girl who looked about 25 years old and 5' 6" or 5' 7" in height.

I caught myself frozen with both arms upraised as if trying to ward off a blow and around me, for a few seconds all was still. Then passersby seemed to jump into action. Two men ran to her and carried her up and away from the road into a nearby compound. I saw her raise a leg, bend it at the knee and keep it in that position as they moved her. (It was a curious posture, almost as if she were just relaxing). Many people followed the carriers.

-The folks who carried her didn't check to see if she had broken anything before hauling her away.

-Just across the road from me, a woman selling food in a shed and who had seen the accident, had her hands on her head in shock. She appeared to be praying. I said a prayer for the accident victim's well-being too.

-As I drove away, I noticed that just four houses away, a man was engrossed in the newspaper he was reading, having no idea of the drama that had played out just a short distance from him.

-The house after this had another woman haggling with a hawker over fish. They were oblivious of the incident too.

Life goes on, the pain of some not being realized by the majority. I pray this young woman becomes as strong as she was before the accident.
Posted by laspapi at 3:05 pm 1 comment: Links to this post