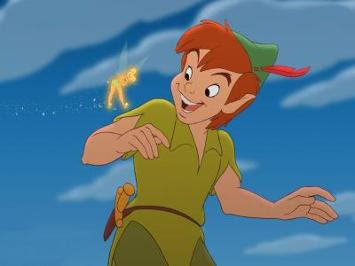 as published in the Sunday Guardian

In many ways, I believe I bear a resemblance to the Walt Disney character, Peter Pan, based on the play, “The boy who wouldn’t grow up” written by J.M. Barrie. Peter Pan lived in Never Land with his friend, Tinker Bell, could fly where he wanted, time did not exist for him and he battled pirates all day long. Many men lived this life of adventure as children. Their tragedy is that adulthood comes and they no longer are able to find “Never Land”. I heard Kevin Costner on television say once, ‘when a man loses the child in him, he loses everything’.

An old secondary school mate came into my offices one day and saw a play-station console but couldn’t believe it was for me. I did not disabuse his mind. I suppose there are some of us who believe that because adulthood brings added responsibilities, we should live our lives like people who never found pleasure in looking at the clean sand at the ocean’s edge. For me, the world must always remain a place of beauty, a place where joys are strong and as simple as you can make them. I have not forgotten how to laugh even though I pay bills now and sometimes stare with hostility in confrontations with the tax men of this state government.

I told my friend, Adeola the Pharmacist, a few months ago how I felt about being Peter Pan. It is a unique place to be. The Whisperer still reads comic books, loves to play Wii and Play Station and plays actual football every Friday night in Ikoyi. By the way, if as a woman, you have ever said the reason you love a man is because he makes you laugh, you have a bit of Tinker Bell in you.

I do no talk of childish men in this article but of men who have not lost the child in them. I stare in wonder at little children when I see them; the incoherent babble they make that has so much meaning to their own ears, the spontaneous laughter that comes at seeing a bubble rise in the air, sheer happiness at life itself. You see two eight year-old boys walking along a road in deep conversation, one’s arm around the other’s shoulder. What is the conversation about? The stock exchange? A missing politician? No, they talk about life itself and its greatest pleasures- things such as loyalty, truth, honesty, genuine friendship. Children do not stab each other in the back; if they are your friends, they do not make snide remarks when you leave the room. They genuinely and totally believe in you, believe in love and in the world’s goodness. There are no attempts to second-guess you, no bid to intercept a move or some act of perfidy they might suspect. A child tells it like it is. “Adults” should too, and not hide treachery behind “diplomacy”. There are women who say the trouble with some men is that they refuse to grow up. If growing up means I forget how to laugh and become full of guile, I’ll leave “adulthood” to you.

Where did the inspiration for a Peter Pan article come from? The Whisperer is a playwright as well and produces plays weekly on Victoria Island. That itself is an indication of a Peter Pan state of mind. However, I write today because of a female (when have I not?). I lost contact with this one a long time ago but had written about her many times in the past. I liked to describe her as still waters, a female with such a calming effect on me, it appeared almost unnatural. However, she seemed to disappear off the face of the earth, vanishing completely without the faintest trace. I looked for her with ancient tools (word of mouth) and space-age tools (the internet) but not even google could show me where she was.

One day out of the blue, she sent mail to me. You must remember that nations had been built and destroyed in the time we had not seen each other, but that day, I put on my laptop and there she was asking how I’d been. We got talking (she was married and appeared quite happy in her situation) and we agreed that we’d meet for a coffee the next time I stopped by the country she now lived in. A couple of weeks ago, I went in pursuit of theatre lighting equipment to the United Kingdom and gave her a call to say I was around. We then fixed a day we would both be free to meet. That day, even though Manchester United and Arsenal were playing a football match, I knew nothing could stop me walking by “the still waters” and at least taking a glass of orange juice in some pub to catch up on old times.

What struck this Peter Pan when I met her was that she was no longer the twenty-two year old woman I remembered. She was a grown woman and mother and even as we sat over drinks, I could not quite fathom it. In retrospect and with “adult eyes”, you might ask, “What did you expect?” Would she have stayed the same forever? She had stayed the same actually, only she looked, well, older than a twenty-two year old. I suppose somewhere deep in all our minds is the deep-rooted belief that we have not changed since we were twenty-one or twenty-two and therein lies the danger of being a Peter Pan. Even though one must not lose the essence of youth which is the greatest elixir you may ever find, we must always remember to synchronise the passage of time with our situation. We must remember that our true natures might stay the same but our physicality changes. My friend that I met with again was still a very-good looking woman but she wasn’t Tinker Bell who never grew up, age-wise.

The people we love, sooner or later, will have grey hair, add a few pounds to their body weight, and be less active than you once remembered them to be. This is the truth about life but you can have the last laugh when as Peter Pan or Tinker Bell, you hold dear the memories you once shared, and you continue to love as time goes by.

laspapi@yahoo.com
Posted by laspapi at 11:04 pm 12 comments: Links to this post 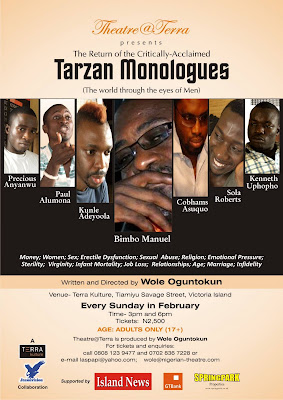 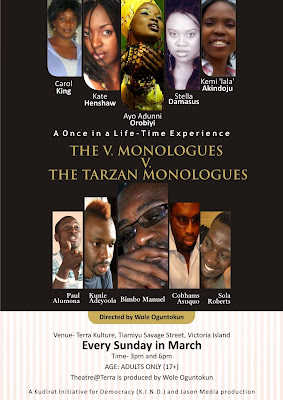 Its unprecedented. February & March in the Theatre@Terra.

The Tarzan Monologues every Sunday in February. 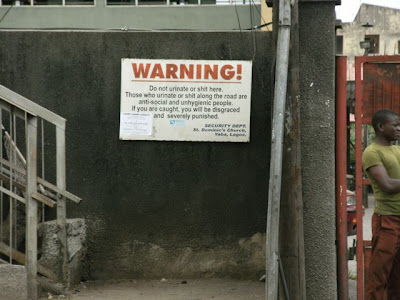 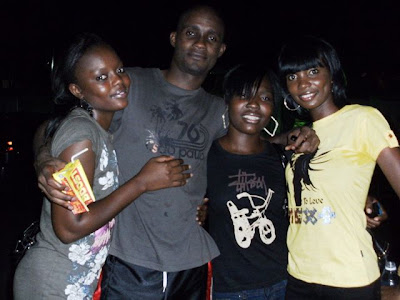 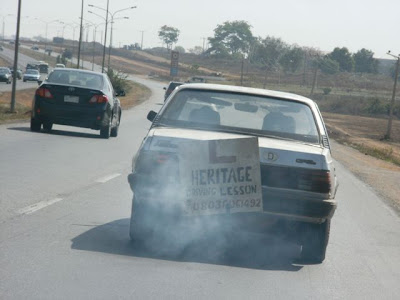 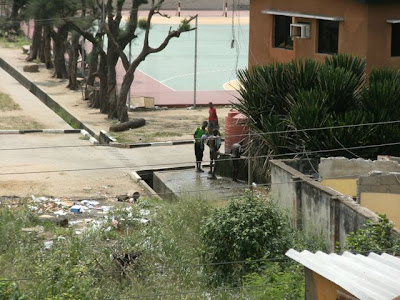 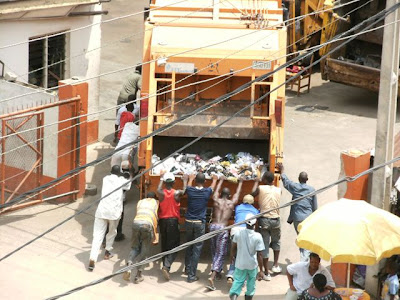 A Day in Gidi

Pic 1 - Disposing of the Waste Disposal Van - Lagos (Monday the 15th).Pic 2- The heatwave in Lagos forces a shower break. Pic 3 - Abuja's driving school. Pic 4 -Kola 'Kolabo' Krakue says farewell to Astro Turf after the game on Friday the 12th of February. He is now out of the country. Pic 5 - A sign outside St Dominic's Church on Herbert Macaulay Road, Yaba.
Posted by laspapi at 10:15 pm 1 comment: Links to this post