A picture does not a blog make.

After my camera was stolen on the 10th of February, at CMS bus-stop in slight traffic by two drug-crazed fellow citizens, it affected my input on this site. And then I remembered, I'm a writer, not a photographer.

So I'll be mixing photos and words as it ought to be, I think.

I was on my way to see WOZA ALBERT at the J.K. Randle Hall, the the day I was robbed. (Lagosians talk about robberies like visits to the barbers). It wasn't a violent attack. One chap distracted me and the other stretched his hand into the car from the other side. I was advised by a bus conductor not to give pursuit. Made sense.

Woza Albert, with a two-man cast is a satire that imagines the second coming of Christ in apartheid-ridden South Africa. It made intense and compelling viewing and caused me to reflect again on the countless sides theatre has.

There were brilliant performances by Kayode Ogunyemi as Percy and Toyin Oshinaike as Mbongeni. The presentation was directed by Niji Akanni.
Posted by laspapi at 6:55 pm No comments: Links to this post

Prison Chronicles- A Stage Drama written and directed by Wole Oguntokun will be live at the Muson Centre, Lagos, on Sunday the 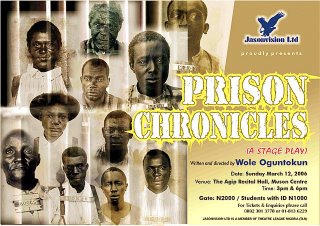 Found this promo of a stage play performed in London in 2004 hidden in my stuff. 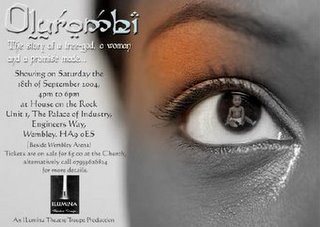 Titled Olurombi, it's the Yoruba folk-tale of a woman so desperate for a child, she pledges her pregnancy to the tree-god, Iroko...and the tree god comes to collect. Performed by a drama troupe in the House on the Rock (a church based in London), I guess it must have been given an end different from the one we know. I never got round to seeing it, but the song in the folk tale, for me, is a metaphor of the tale of Nigeria.

Posted by laspapi at 9:44 pm 2 comments: Links to this post 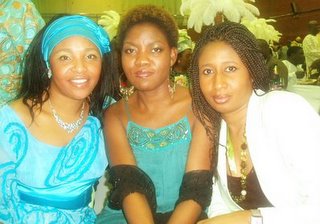 - Ireti Bakare (Sisi Oge to all you bloggers) on the left, Art Writer and General Wordsbody, Molara Wood (centre) and Dunni Shonde, friends for upwards of 2 decades, at a party on the 28th of January 2006 .
Yep! Girls just wanna have fun.

Posted by laspapi at 2:40 pm 2 comments: Links to this post