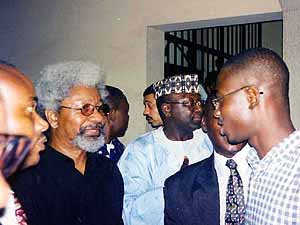 Professor Wole Soyinka a few days after his return from exile, meets Ponmile Oloyede, cast member of " Who's Afraid of Wole Soyinka", the stage play, after the first Command Performance at the Muson Centre in October of 1998. The Writer and Producer, Wole Oguntokun (in tie) is partially hidden. Dr. Yemi Ogunbiyi in cap and glasses is in the background. Professor Soyinka was not to see the play again until his 70th birthday anniversary in July of 2004
Posted by laspapi at 5:04 pm