The most dynamic journalist in West Africa of the 1930s according to some records was Nnamdi Azikwe who later became the first President of Nigeria. In 1927, "Zik" established the West African Pilot, a newspaper, in Lagos. The W.A.P. was a mix of radical politics, gossip and women's affairs and proved very popular in the country. The dilapidated building in the photo, located at Sabo, Lagos State was once the office of this Newspaper, and it still has the name inscribed on the edifice. 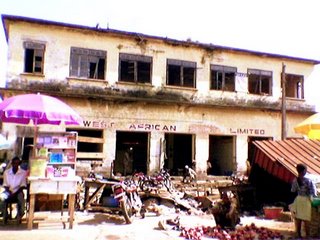 Now a haven for money-changers and petty traders as well as vagrants at night, there is a small white and blue banner on the building now (See the top right hand of the picture) which states that "Offices to let".
Some mind-dead barbarian will pull this cultural monument down to create small boxes that will be let as photo-copying "business centres" amongst other things. An equally uncouth government populated by uncultured philistines will sit and watch this happen.
Can they not see? Or reason? Or feel?
Shouldn't this building be restored and made a point of interest for foreigners and Nigerians alike?
Still, I delude myself. The Nigerian Television Authority resorts to the BBC when it needs to show footage concerning the independence of this country as the NTA (and its predecessors, the WNTV and ENTV) has no records of its own. There are no copies of the "Village Headmaster", once Nigeria's most popular soap, which ruled the airwaves in totality in the 1970s, "For better, For Worse" or "Winds against My Soul". Illiterate Camera men and Editors wiped them to re-record on the tapes in times of shortage and Producers of that ilk allowed this, destroying chronicles of history. Microfilm copies of the West African Pilot exist in the libraries of the Columbia University, not in Nigeria. The people in charge here, do not realise that it is the refusal to give our Culture its place in the affairs of this country, that makes the world look down on us.

If only we learn to preserve & maintain relics (that have a story to tell -of history).