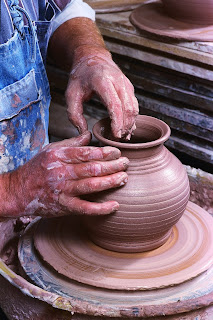 We’ll start this ‘story’ properly by defining what a mould is for those who might not know. It’s what potters and people of similar professions make their casts, shapes, patterns and forms from. You make the mould then pour in the plaster, the clay, molten gold or whatever else you might use to make your shapes and it brings an exact replica of the form of the mould. In that case, you might call the mould the master-copy.

One day, a while back, Sherri, a female who stays continents away and whom I consider very pleasant, wrote of me, “they broke the mould after laspapi” and that set me thinking. What happens when we find the perfect person, that person who meets almost all of our needs and expectations in a partner and we get on like a house on fire, but then someday, for whatever reason, we have to part ways permanently with that person, road leading onto road? What happens if the perfect mould is broken?

Let’s be truthful, the world has basic types of people. Even the Whisperer has categorized women into four main groupings, the Jerry Springer, the Free Spirit, The Girl Next Door and the Thorough Bred. However, these are broad generalizations and even within groups, there is massive individuality. So you meet the perfect partner, the one who laughs at your jokes, who looks at you from across the room and you know without an exchange of words that it is time for you to leave the horrible party both of you made the mistake of attending. What happens to your world if this person leaves, if the mould is broken and cannot be replaced? One might create another mould, some would say. That might be true but it would never be the same. It might be better ...or it might be worse. The idiosyncrasies that come with one partner are rarely duplicated in another. The laughter, the friendship, the way people respond when upset or annoyed, the intimacy; all these things are peculiar to individuals and you cannot teach another to be like the one that went before. It is disrespectful , as a matter of fact, to even try. There are no two people that have the same kind of dentition, not even twins. You find someone who’s like your mould and yet, there’s something missing. Maybe laughter that goes on a bit too long or is a little bit too loud or just has a grating quality that sets your teeth on edge.

The Whisperer asks again, “what do you do when the mould is gone for whatever reason?” The separation might be your fault, the fault of the mould or circumstances beyond your control. Yes, life isn’t always fair, so get ready for the curve balls. By an accident of fate, the “perfect partner” has walked out of the door and you know, you just know with a sinking of the heart, “he ain’t coming back this time”.

In retrospect, the Whisperer believes that quite a number of his relationships were with people who looked like a master copy since long gone. It appeared it was a subconscious thing not done with any afore-thought malice. It just happened that a number of subsequent partners looked like a certain female the Whisperer once cared greatly about and who also cared about him. Some would argue that men and women have certain specifications, standards they want partners to meet, whether physical, emotional or intellectual so that might be the reason your partners seem to look the same way. It isn’t always so. It might just be because somewhere deep in your heart, you’re looking to replace the person who rocked your world, anyhow you can.

If the mould is broken, is life over? It would be foolish to set out thinking that life has ended because you cannot continue a relationship. The world as you know it might have entered a new phase but you must look on this as an opportunity to improve the prototype...if you’re lucky.

The world is full of beautiful people and you cannot lie down and die because the pain in your heart is unlike any other that you have felt. An amount of philosophical thinking is needed here and it is that if it was meant to be, it would have been. The Whisperer, once or twice, has lost out on lucrative-appearing contracts unlike any in his profession but he learnt one must have the ability to turn one’s back on these disappointments and move on. Pain paralyses and will make nonsense of your future if you do not let go.

Travel the world, take up new hobbies, and meet interesting people from the North, from Kenya, from Tibet, anywhere. Win a Grammy like Tina Turner after managing to escape from the abusive Ike, be like Cher who continues to re-invent herself generation after generation even though Sonny’s long gone, or like Halle Berry and win an Oscar after your man rejects you in public. It doesn’t matter how you do it, but like the Nike advert goes, “just do it”. Do your best to make a much better mould than what you had before and improve your art.

As an aside, I receive mail from strange men who believe the pictures that accompany the “whispering page” are pictures of the writer. The pictures of the usually attractive women (there have been a few lapses of judgement) on the page are chosen by the staff of the Guardian and not by the Whisperer. The Whisperer is male. And anyway, except you’re brain-dead, just reading a few lines would let you know it was a man writing. So here goes to the men who have offered me homes in Abuja and in Calabar; those pictures are not of the writer.

But I digress. If the mould is broken, you can make a new one, an improved one, cast in stainless steel or made with flawless titanium. The world is a beautiful place and the Whisperer has met many, many beautiful people; women with great hearts and great, great minds, and he faces the future with a huge smile on his face and a jaunty spring in his step and he tells you, as one friend to the other, that you should too.
Posted by laspapi at 10:02 pm

I totally agree with your last paragraph.. I used to think there was only one mould for one person.. Racking up the years, and moulds have made me see its a little bit more about effort than chemistry most times!

Let it be on record that i absolutely love your Whisperer series; believe it or not, they have helped me in certain matters of the heart. And i love the work that you do also!
And we as humans just never know when we are in possession of 'the' mold so we treat it shabbily, leaving it broken.
Here's to recognizing the perfect mold!

i am a newbie in blogosphere,coming across ur blog was a delight, seeing the girl whisperer here doubled my joy..i have always been a fan but i dont always buy the paper..i hurriedly folowed your blog..i totally love the way you write..kudos for a job well done