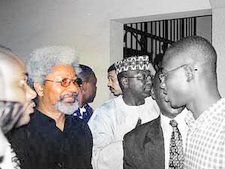 Recline awhile on harvests of feats and muse on the odds of those yet undone- Wale Obadeyi.

In this picture, I (partially hidden, in the suit) introduce Ponmile Oloyede (in glasses, right), then President of the Students Union of the University of Lagos, to Professor Wole Soyinka after a Command Perfomance of my play, "Who's Afraid of Wole Soyinka?" in October of 1998 at the Muson Centre, four days after the Professor's return from an extended exile. In the background, with the cap, is Dr. Yemi Ogunbiyi, former M.D., Daily times and Soyinka's former student, now close friend and ally. Behind him is Ola-Okun Soyinka, the Professor's first son, a medical doctor.