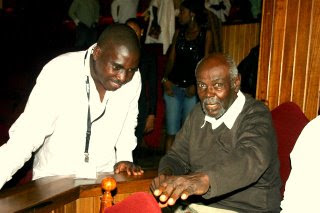 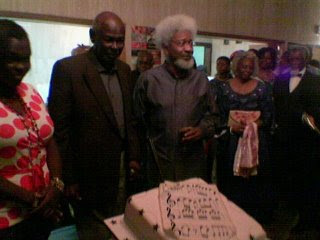 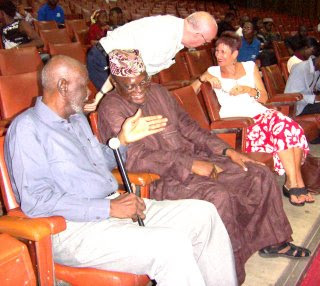 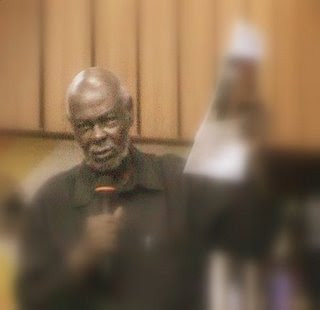 Elder Steve Rhodes died on Thursday the 29th of May at 3pm, in London. Steve Rhodes, founder of the Steve Rhodes Orchestra was one of the foremost musical artistes ever produced by the African continent.

In the first picture, Steve Rhodes tells laspapi his opinion of the play after the latter's direction of Ola Rotimi's 'The Gods Are Not To Blame' at the Muson Centre. Oct 2006.

2nd Pic- Wole Soyinka and Steve Rhodes at the Muson Centre 2006. laspapi had gone there for an appointment with Professor Soyinka over the first Soyinka Season Of Plays.

By some coincidence, Steve Rhodes was with playwrights in every picture.
A great man, a kind man, I last met him at the National Arts Theatre showing of the V Monologues- The Nigerian story, which I directed in March this year, a performance which he attended in the company of another legend, the female actor, Taiwo Ajai-Lycett
Posted by laspapi at 4:37 pm

steve rhodes is dead!!eeyah!!he used to come to my high school

Oh my. This is truly a loss but then again, he lived a long and seemingly fruitful life.

oh boy, he was a q.c boy as weird as that sounds. his achievements will live on after him anyway.

Great Ife!!!! Hmmmmm you don unvail yourself at last. I missed the interview sha. Give us a recap pls. By the way, how do I get to meet Soyinka at my 30th b’day which is the same day as his?
May Steve Rhodes soul rest in peace.

Which roll-call be this?

Do we mourn those who leave great memories? Do we mourn or does their memory put a smile on our faces?

Steve Rhodes.....a legend in his own way.

'tis simply a call for 'we' to live for something.

Remember his 70th birthday celebration like it was yesterday.
Remember his concerts ( this " Me I like my country...." song is stuck in my head)