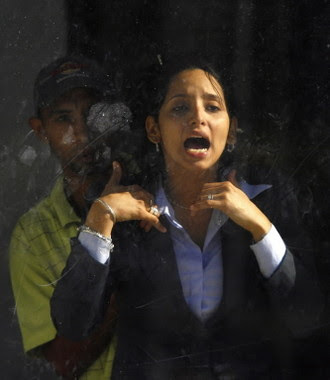 published by the Sunday Guardian

I thought I’d go the way of the lawyers today, seeing that the Whisperer has actual degrees suitable for that calling. Whether he uses them or not is a different matter, entirely. For today’s purposes, we shall define acting in duress as taking a position or doing an act you would not normally, because you are under pressure from an external source. Undue influence is an integral part of acting under duress because the person putting you under pressure is often in a position of influence over you and has the resources to put you at a serious disadvantage.

Let’s run through some of these things so we can be clear. The bank managing director who states you must bring in a quota in deposits, and he doesn’t really care how. You, the married or engaged female (by the way, it’s as criminal even if you’re single and free as a bird) are told there’s no way you can continue to be retained by the bank if you fall short of expectations. Deposits by hook or by crook and every which way but loose. He (or she) doesn’t really tell you what to do to bring these deposits in from lecherous money-bags, but you get the feeling that you must use what you have to get what you need. Sometimes in these matters, talking is kept to a bare minimum yet all positions are made utterly clear. If you do not go through with this, there are repercussions you will face. Duress and undue influence.

There’s the lecturer/teacher onto student type where the student has a borderline pass or fail score. The lecturer can defend his decision to fail the student and the student knows what must be done to prevent this. Kind of ugly, but these things happen. Like my friend, Funmilola Iyanda likes to say, all you have to do is work really hard, and then you can challenge any unjust score. Unfortunately, it’s much easier to pass borderline, what with MTV and the numerous distractions that hold the attention of the hare-brained.

There’s the one that’s sanctioned by some families. Dad (or Mum) says I can’t afford to pay your school fees, buy this or that for you. ‘Uncle’ so-and-so, who is a good friend of the family, has made it clear he thinks you’re adorable and has hinted he would like a hand in your education. Dad (or Mum) and sometimes both together send you off to go greet Uncle on a quiet Sunday. Uncle’s wife is long gone, children are abroad. You’re alone with this man and somewhere deep down in your heart of hearts, you know your parents have placed their seal of approval on this liaison. Impossible? You may doubt the evidence of your eyes when a magician shows you his arsenal of tricks, you may doubt the strength of a skyscraper to withstand the gusts of heavy winds, but do not doubt the Whisperer on this matter. There are parents who do this.

Duress and undue influence. All around the world, these are major factors in decisions taken daily. The refugee who knows she must share body heat with the official of the camp she is compelled to live in if she wishes to eat well; the policewoman who knows she’ll never get beyond the rank of corporal, if she doesn’t yield to the very subtle advances she perceives from her superior. ...numerous examples

The females who have to face these twin-tidal waves should be differentiated from those who willingly yield themselves to anything for the sake of advancement. In the latter case, there is no duress, no undue influence. There are those who deliberately go on the hunt for their tutors, confident in the belief that their academic futures are secure if they can catch him alone in a private room. There are many who advance far above their colleagues at work and in business because they are ready to go to any length to attain the corner office. For those who have this tenacity of purpose, this single-minded obsession to achieve their goals no matter the cost, the Whisperer has no word for them, not praise or an iota of condemnation. These things have existed before time and will continue to, long after we’re gone from the face of the earth. Some go to war to extend their lands and the borders of their countries, other fight smaller wars to advance themselves. It’s the way of the world.

My concern is with those who are forced to give up the things they hold dear, their most sacred values because they are under duress from people in positions of authority in their lives. When the person who has put a roof over your head asks you for some things, it takes a very brave heart to say the word, no.

Still, you must sit and ask yourself, what things are most important to you. You must ask whether you will be able to look at yourself in the mirror the day after, or you will spend the rest of your life cringing in misery each time you remember the event. There are those whose consciences are dead, who hold nothing dear and can do any act to get to any position. That kind of state of mind cannot be cured by one article written by the Whisperer and what they really need is therapy. Therapy and a re-orientation to lead them back to the things that are right and proper. Many of us instinctively realise that the confidence with which we speak about things attained through merit is different from the things we took corners to get to. If your first thought at this is that the end justifies the means, your value system needs an overhauling.

For those who face this kind of dilemma, you must balance what is being asked of you against your sense of self-worth. If the sense of self-worth weighs more, it is better to be true to yourself. No matter how hard it might seem when ‘tribulation’ hits you for holding on to what is dear to you (and repercussions will come, don’t be fooled), you must stand by what you believe.

Keep this in your mind always, however: A person who doesn’t stand for something will fall for anything and good guys don’t always finish last.
Posted by laspapi at 11:35 pm

"...A person who doesn’t stand for something will fall for anything and good guys don’t always finish last..."