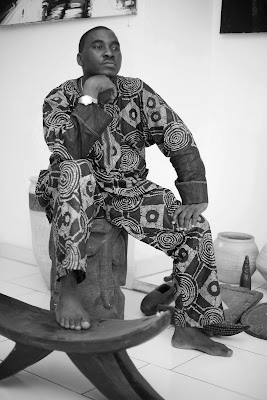 My mother told me how at Nigeria's independence (whatever that term means), she had willingly traded her British passport in (all citizens of the colonies had a right to the British Passport at the time) for a Nigerian one.

Many Nigerians who had studied in Great Britain returned home to help move the young nation forward. They settled everywhere, with Lagos receiving its fair share. There was no real demarcation between areas then- Iwaya, Onike, Surulere, Mushin, Ikeja...Opebi was bush-land, no one wanted it.

And the high-brow places were where the colonial 'masters' had lived- Ikoyi and Victoria Island.

They obtained mortgages, car loans, had steady jobs, paid back the loans. A Head-Of-State (Gowon) told the world that Nigeria's problem was how to spend money. There was too much of it.

Then the melt-down. Mismanagement, avarice, nepotism...all came disguised as Nigerian leaders and they tore through the treasury like rabid dogs in a cage of canaries.

When the final feathers floated to the ground, there was nothing left and a generation that had known the security of colonial influences had nothing. The security they had thought would last forever was gone and the economy was a shambles. A sitting 'President' (Babangida) told reporters he had no idea what was holding his country's economy up.

Those who had trusted the country to look out for them found they had nothing left. There was no where to go, no one to turn to. And old men who should have retired into quiet country homes to live out the rest of their lives in peace, returned to work. Some to offices, some to construction sites, carrying rubble in the tropical sun with their failing strength side by side with boys they could have been grandfathers to.

They roam our streets now, these tired old men, weary to their very souls, feet dragging as they walk in search of employment, but who will feed them if they stay indoors?

There is a generation though that has refused to be quiet. Some of those who studied abroad decades ago, gave birth to their children in those countries and now the children return in droves, seeking solace in distant, less-confused lands. Those not so 'lucky' to be born in those places, look for loop-holes, stow away in ships, walk across deserts. Some reach their promised lands. many fall by the wayside.

The next time you walk past that tired old man on the street, spare a thought for him. He was once like you...before the betrayal.
Posted by laspapi at 12:50 pm

"The security they had thought would last forever was gone and the economy was a shambles."

The more I read about the colonial encounter and the intervening years that led up to independence, the less surprised I am at the Nigeria of today. What surprises me, in fact, is that people actually believed in the legal entity called Nigeria.

Zik, Awo, and all our so-called founding fathers did not have a clue, man. These guys thought that running a country was like running a secondary school.

They were middle men like the colonial errand boys who called themselves traditional rulers. Colonial power was filtered through them, thereby cutting of the people and weakening their civil significance. The difference between the educated elits and the trad rulers was that the new elites had far better bargaining power.

You don't have to be an expert in economics and political science to see that Nigeria did not have the social infrastructure to run itself and, worse still, lacked the creative leadership needed to create one from scratch. When Enahoro called the motion for self-government, I doubt if he new the first thing about the kinds of social/civil systems and relationships that are key to a nation's growth and survival.

Whether these men were sincere or not, i don't care. What kills me is that they were so short-sighted, that if only they were a bit smarter, Nigeria might either have been more prepared before independence or might have taken the appropriate course to strengthen the attending weakness of their premature independence.

btw, I love ur outfit in the photo... is there any purple in it? its really lovely

this is really moving. papi, that picture, u too dey pose. lol. its rili cool

I know it is the popular meme that Nigeria once was good, and mismanagement has driven the country to financial ruin, but I hold and am about to offer an alternate view.

That is no longer the case, and has not been for a very long time. The government now has to provide for over 100 million people (whereas they used to be responsible for about 5m), and the resource pool has not expanded.

Today's reality is that Nigeria is a desperately poor country, and the first step in any solution is recognizing this..

You think we have oil money? Not really true. In total, Nigeria has earned about $500b from oil since 1960. Not a lot of money.

I believe Nigeria's budget for all of 2007 was something like $21b, contrast that with New York City's budget of $45b in the same time period and that should give you some perspective.

Ok..this rant has gotten too long, and I'm too lazy to scroll up and read everything I just wrote, so I'll sign off here

How sad -eh. Like you I hope for the better day believing it must come... it has to come ... right?

it started with greed and gullibility (my opinions tho) and i also concur with 'lost at the end'
still like i have often heard many 'rights' don't make many 'wrongs' either......i'ld still take the time to spare that thot
and yes that picture is lovely!!!

I think Nanijoe has a better idea of it all. The First Republic looked like El Dorado because of the limited sphere of influence and responsibility.

Subsequent republics refused to grow beyond the first.Thus our problems were due to the fact that as Nigeria grew, the leadership/elite refused to grow with it or even understand its dynamics. Thus they try time and again to keep Nigeria within their ken, stunting its growth where possible by direct sabotage.

Thus we would go back twenty years to bring back an OBJ as our first president for the 21st century. And when Nigeria made progress 'IN SPITE' of OBJ, we bring an UMYAwn who is busy returning every thing back to 'status quo'.