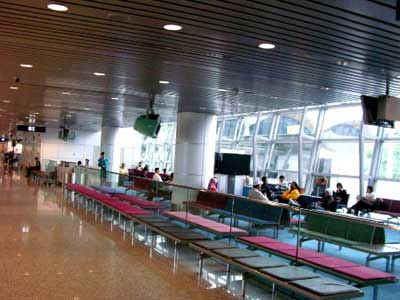 For the past half-hour or so, I have lain on my back and watched the day break through the windows. I have also placed Ibiyemi’s new single, “Don’t Leave Me” on repeat. Her rich, strong voice sings with all the pain of a girl who, in spite of the misgivings she had from the start about the fellow who came cruising into her life, starts a relationship with him. A relationship which appears enjoyable for a while, before hitting turbulence. She plaintively begs him not to leave her standing all alone. “Don’t go” she sings to this fellow who’s had enough. “Till the end of time, I will love you, don’t do this to me.”

At some point in our lives, and hopefully while we are still quite young, we all will stand in a departure lounge and be left behind, knowing as our partner walks away, he or she is never going to return to you. This is where the really young or those that are in denial are going to say “it’s never going to happen to me”. There’s very little chance of you running through an open field like the young Mayan in Mel Gibson’s “Apocalypto” and think you are going to dodge all the spears and javelins thrown at your bare back. One’s going to nick you, draw blood, cause you pain; the prayer would be for it not to impale and incapacitate you permanently.

What is it about relationships and a planet that has five billion people that makes us think the departure of a single person will bring our world crashing down? What is it that makes us sing like ‘Ibiyemi’, “When you walk out through the door, you’ll mess up my life...I won’t let this go”?

Why can’t we just shrug and say “there are many fishes (sic) in the ocean” or whatever other mundane cliché would be appropriate? It is obvious that the synchronization of one’s life with that of another human, creates something, an entity, a corporation, an existing structure, that to pull down would tear the soul apart (or at least cause that kind of pain). Instead of the business structure that requires hard-headed common sense, what you have is a structure built from love (or some similar substance) and two members of the board that are guided by their hearts.

The best way to prepare for pain, some would say, is to have it at the back of your mind that anything can happen to a combination of two people. However, if one enters a relationship with the mind-set that it is certain there will be a rainy day, isn’t the potential for immense pleasure and joy taken away from the relationship from the very beginning?

Should we, because we are afraid of heart-break, not take risks? Now if the ‘risk’ becomes one that shoots us in the face, do we walk away from it or like Ibiyemi, sing the words, “Don’t Leave Me”? Years ago, the yet-to-be Whisperer received a letter. In it, the girl he felt he had found happiness with wrote, “I love you with all my heart but you can’t give me what I want”. Somewhere along the line and before the letter came in, I had come to my senses and prepared myself for such a day as that, still it did little to temper the pain. However, the preparation made it certain that I did not plead with her to stay. Years later, as she and I laughed over it, (well, I did the laughing, she was too busy being pained by how far I’d come), I realized that sometimes it is best not to hold on to someone who is insistent on leaving or a “love corporation” that has fallen apart. If a member of the board is bent on dissolving the company and there is a stale-mate, better to yield to the person who can no longer see the vision or you will go bankrupt.

The best revenge is living well, and if like the Whisperer, you are like wine, getting better with age, the last laugh should be yours. How many of us have come across people who “dumped” us and have thought with an inward sigh of satisfaction and the words of Sunny Nneji’s song in our heads “I’m the little bird that couldn’t fly, now see me high up in the sky”. I apologise, but yes, I have had the opportunity to sing those lines in my head after a separation in the departure lounge.

People will leave you because they do not see your potential (you should let those go, they are likely to become impediments to your development) or because they think “you do not have what they need” (whatever that might be). One of my favourite people, J, was left behind at the departure lounge by some chap after she had gone ahead to start a relationship with him despite serious opposition from her friends (and they were a tight lot). He left her for someone he considered more glamorous but she, in turn, found happiness and incredible advancement elsewhere. In retrospect, it was a good thing he got out of her life; he would have cramped her style.

The well-worn saying is true in this case, “if you love something set it free. If it comes back it is yours, if it does not, it never was.” There are many reasons why we so strongly hold on to those who are in turn, desperate to get out of our lives- We wonder where we will start again, from; how we can find the strength to wake up the next morning; how we will ever be able to make the pain go away. The Whisperer thinks we should let those who want to leave, leave. “A person convinced against his will, is of the same opinion still.” We must find the strength to say goodbye, to get on with our lives and above all, to continue to add value to ourselves. It is the loss of anyone who insists on walking away. Life is too beautiful to spend it in misery because of someone who does not want you. Tell the person, “get up and get out” and make your life continue the way it should, positively.

This Whisperer likes Ibiyemi’s song for many reasons apart from its superb melody. One of these is that the lines made him think, and there are parts of it that remind him of the all-time heart-break song, Dionne Warwick’s “Walk on by”. In affairs of the heart, well, you must follow your heart but remember, don’t let another human’s actions or omissions be what give the meaning to your life.
Posted by laspapi at 3:45 am

You're so right! It's so necessary to let go and let it be. However, it's sometimes necessary to face that 'worst pain' - somehow it makes all the others easier to bear, doesn't it? Also, sometimes, the pain that you're faced with is payback for the hearts you've broken, in which case you should only be thankful, knowing that your punishment is short-lived :)

success is the best revenge. the satisfaction I get from seeing an ex look at me as his eyes betray his feelings that loudly say 'damn i messed up' is all the strength I need to keep the faith that says the best is yet to come.

Superbly said. In theory, everything you say is true. Its the doing that is the hardest part. I very rarely come onto blogspot these days, but anytime I do, I check out your page, and you always have something just for me. It's uncanny how I've stumbled onto this. I just wrote a post on this exact same topic, but from the perspective of the 'not as yet liberated' soul, as it were. But I'm getting there. Thank you for writing this. It speaks to me in ways that you can never know.

"...sometimes it is best not to hold on to someone who is insistent on leaving...." a sincere truth but, more often than not difficult to sustain. Ultimately though, to (him) who sustains, 'tis always a pleasant laugh "...best revenge is living well."