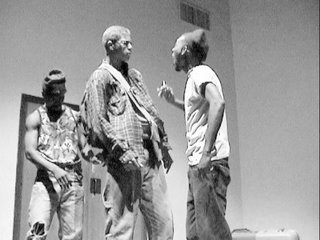 The Picture's from Wole Oguntokun's stage play, 'The Other Side'.

In a reversal of roles, Europe and North America are the continents of lack; Africa, the continent of abundance, and Lagos, its most attractive city. In the premiere, a lagos ruffian (Osagie Okedigun, right) meets 'a boat person', (Anthony Offiong, Centre) and asks for his work permit. Another ruffian, (Kenneth Uphopho) backs up his 'home-boy'. In the play, Darren Campbell (Offiong), a caucasian born and raised in the U.K. had come to Lagos in search of a better life. The premiere was staged at the Muson Centre, Lagos, in November of 2002, re-staged in April 2004, featured Kate Henshaw-Nuttall in October 2005 and for the Associated Press in November of the same year. All performances were at the Muson Centre.


I’m trying to lose this accent
trying to blend into my surroundings
like insignificant wallpaper
I’m trying to smile
when you laugh at my mistakes.
Trying to be a good sport.


I’m trying to be you, curse this clumsy tongue.