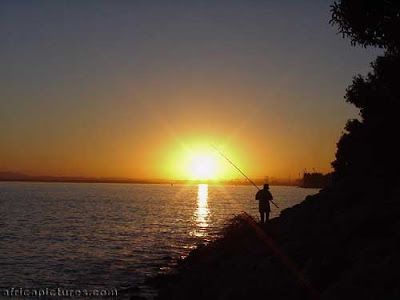 It’s just a few hours into this New Year and the Whisperer like the rest of the world believes it will be one that brings many beautiful things along with it. More than a decade ago, a friend, Dejo Fabolude’, wrote a poem titled an ‘An African Christmas’ and asked in it, “why dream we of Rudolph’s red nose...and fireside repose”, all the trappings of an English Christmas.

For me as a child, the Christmas season and the coming New Year were some of the nicest periods in my life. There was the quietness that pervaded at that period, the hustle and bustle of the city greatly reduced, and the goodwill you could actually ‘feel’ as you walked past or met with complete strangers. It was Christmas and the world was at peace. There were the greeting cards sent to families and friends everywhere, greeting cards with silvery glintz that caught the light and which you could feel if you rubbed a finger down the cover of the card. These things made the life of a child very pleasant. These cards held pictures of ‘Peter and Jane’ families at dinner, the dog asleep in front of the lit fireplace, snow heaped on the rooftops and on the roads, a warm glow from the street lamps with the yellow lights that drew arcs on the quiet roads, a warm glow that conditioned us to believe it was a time when nothing could go wrong. And nothing ever did. Christmas was magical for this child that would become the Whisperer. The air always smelt different at Christmas, cleaner, crisper or maybe it was just the fact that there were lesser cars in the city and the harmattan winds were at work. There were no cares and absolutely no fears, every child at that time knew he would live forever.

I have never seen a reindeer in real life, never met a white Santa Claus, never met actual elves or been to the North Pole but the peace that Christmas brings should be one encouraged to stay through the year. I am not entering into debate with those who say the Christ was actually born in September or March or some other month and therefore should not be celebrated in December. Those things mean little to me. I speak of the ‘spirit’ that flows through neighbours and strangers at that time and the hope that all have that the future will bring much better things.

However, even with all the beauty that follows the ‘greeting card’ Christmas, there is such a thing as an African side to it. The hustle and bustle that causes insensitivity is greatly lessened in this period and people once again allow their true selves to come to the surface. People are treated with compassion and the less-affluent are sought out and assisted. It’s a great time to be alive. The role of the communal spirit in the yuletide season in Africa is a very significant one, it’s a time when you may get help from the most unlikely places, when friendships are made stronger and love thrives.

What does the future hold for those in love or those who seek love? There are no sure answers to this, no time-tested methods that will guaranty life-long happiness; however, there are basic ways to avoid pitfalls. The first rule in your relationship in this New Year is not to operate under the delusion that someone else will ‘complete’ you. If you are an incomplete structure, you have no business allowing other people to inhabit your premises until you’re ‘safe’ to live in. There is no one person that can complete another human being, they can add value to your life as a person, bring great happiness to you, but your joy and sense of self-worth must come from within. The Whisperer is aware that there are people who go around, believing their next relationship will somehow transform them as persons and make their lives wonderful. There is no such thing, and all you do is prove a maxim that “It is every man’s inalienable right, the right to deceive yourself. No one can take it from you”. People who go around seeking their completion in others do disservice to themselves and the persons they end up weighing down. It is a truly developed person that should be in a serious relationship. In that case, the other party is able to benefit from the union. It’s quite simple, ‘be a radiator, not a drain’. When we go searching for the ‘missing part’ of us in others, we end up with more missing parts. A great part of life is about self-development and there is no Eastern mysticism in that statement. Develop yourself; make yourself a more attractive person, emotionally and mentally and the cards will fall in place for you.

Do not imagine also, that finding someone who’s right for you means the ‘work’ is over. As a matter of fact, that’s the point it’s just started. A relationship is a journey, not a destination and there are few things as difficult to synchronise as two people who come from different backgrounds and psychological make-ups. Even having a relationship with a night-owl if you are a ‘morning person’ can be nerve-racking and put strain on a relationship, talk little of someone you have differing issues with concerning finances, the position of the extended family in your lives and other life-threatening matters. A relationship must commence with both parties (the Whisperer is conservative and imagines there will be only two people involved) purposing they will work hard to make it right. Anyone who says relationships are a breeze hasn’t been in one yet.

Is there such a thing as the perfect mate? Is there someone so genetically modified for you that you will never be all-together until you are with this one person? I choose to think that there is no one person and the billions who have fallen in love with their perfect mates and been heart-broken can attest to this. You can find someone you are genuinely in love with, genuinely compatible with and then you can make it work. But the departure of this person will not end your life. I still haven’t met Nicole Kidman yet I think she and I will get on like a house on fire. There are different things that attract us in different people. The point is to find someone you thing you make good music with, and then hold on...very tightly. Love can be a bumpy ride.

May all your good dreams come to pass in the New Year.
Posted by laspapi at 3:23 pm

Amen to your last line!

"The point is to find someone you think you make good music with, and then hold on...very tightly"- So true.
Here's to a new year of loving and living.
Happy New Year.

Now that's what I call profound!