Found these 3 kittens by the road-side in Akoka, Lagos, about 11 days ago. Two of them had been thrown into a tied sack that had somehow gotten undone. The last had in some way, entered a gutter and was black from nose-tip to tiny claws. 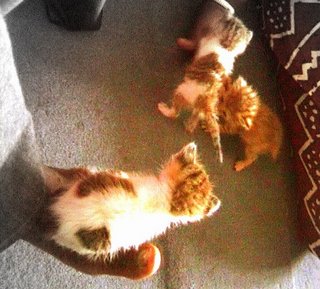 They lay there, struggling to stay alive, scarcely more than a day old. I believe the ones in the sack had been thrown in, next to their dead mother. I couldn't walk away from them and although they stank to high heaven, I placed them in a cardboard box and they've been with me ever since. They've become loveable nuisances now and its difficult to even remember how close they were to death once.

Because they are all survivors, I named the one in the gutter, "Rambo", and the other two, Mr. & Mrs. Smith after the Brad Pitt/Angelina Jolie movie. A vet later told me they were all- female, still I've kept the names.

In the picture, "Mr. Smith" does a balancing act on my foot.

You're an absolute darling. There's only one thing more inviting to some girls than a man who's good with babies, and it's a man who'll 'father' kittens. This is so heartwarming, what a softie you are... meow meow...:-)

The names you've given them are really really nice.. and dramatic, but then I remember you're a dramatist! Rambo's super. And I'm taken with 'Mr & Mrs Smith', even though the 'Mr' might leave us all with some gender confusion. Hopefully, the feline 'Mr Smith' wont care either way. See the 'Brangelina' post on my blog.