On Sunday, February the 26th, RedSTRAT presented The Future 2006 at the City Mall, Onikan, Lagos. Dubbed an authentic celebration of Youth and Achievement, recognition and awards were given to deserving young people under the age of 30- Female Pilots, Writers, Scientists, Artistes 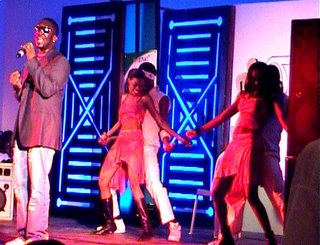 and many other categories. I saw quite a number of "known" faces, under and above the age limit- The actress, Jadesola Ekeinde who was shortlisted for an award herself, Stand-Up Comedians Tee A, Princess and Basket Mouth, Agatha Amata as well as the female talking drummer, Ara.

This picture shows Dare Art Alade, scion of the legendary musician Art Alade (Bar Beach Show), and now a musical phenomenon in his own right, performing at the event.