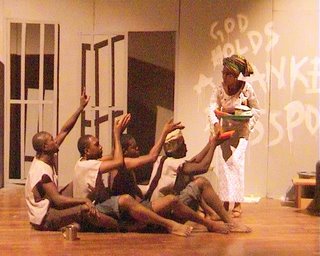 The premiere of the stage drama was presented on Sunday the 12th of March. On stage seated from left in "Cell block B" are Anjola (Paul Alumona), Kamal (Seun Kentebe), Kalis (Leke Oyeyinka) and Kamoru (Kenneth Uphopho). Standing and preparing to feed them, is the Warder's wife, otherwise known as "The First Lady" (Jennifer Osammor).

i think Wole Oguntokun is a voice of theatre in Nigeria... and i mean a big voice. from Ladugba to the other side and now prisason chronicles. He's really one voice that every should sit down quietly and listen... even though most time you cant help the humour he stylishly hides within his plays.
i haven't watched any other proffessional playwright of our generation do thier thing on stage... but watching Wole... is like watching all that theatre has to offer.
keep up Mr., we are listening