The River Sogidi. Located in Aawe (pronounced "Ah-Were" or so) 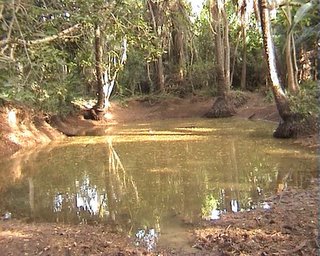 , Oyo State, Nigeria. Legend says that the fish in Sogidi are never eaten. Some say no amount of boiling will ever cook the fish, and a few wild stories tell of how the fish become whole again even after being gutted.
According to the people of Aawe, the river, (more like a pond, really), has no source. It just appeared.

According to locals, the "spirit" that once made the river a home is gone because they stopped worshipping it, but a few hopefuls insist she'll be back if the faithful return.

The people of the town drink from this water without fear. It's the eating of the fish that causes problems. Used the name of the river as that of the lead character in my stage play, "Rage of the Pentecost", (now renamed "The Return of Sogidi") written in 2002