Professor Femi Osofisan at 60. Here he stands, being interviewed by a Nigerian Television Authority Reporter. "Okinba Launko" as he is called by the initiated will be in attendance as the Committee for Relevant Art (C.O.R.A.) organizes another edition of the Arthouse Forum with "Directors in conversation with the Dramatist" as the theme. Directors of Osofisan's works, including myself, will engage him on Friday, June 23 2006 at 1pm. Venue is the Cinema Hall II, National Arts Theatre, Iganmu, Lagos.
There will also be poetry readings, drama skits and music. 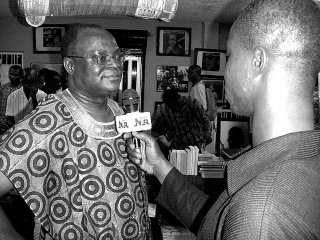