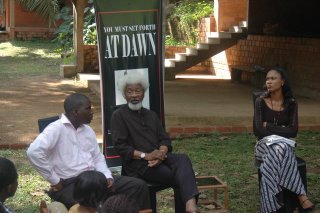 Professor Wole Soyinka's new book is out. Titled "You must set forth at Dawn", the book opens with his return from exile a few years ago and gives insight to the manner of man he is and his opinion on many issues.

Went with Funmi Iyanda, the presenter and producer of New Dawn on the NTA Network television to be part of an interview with the Professor. It was a mind-broadening experience.
Funmi transported more than 20 people (students mostly) to the Professor's retreat/Writers Resort somewhere in Abeokuta as well as her crew.

I'm a Soyinka groupie till the day I die. What would you call the writer of a stage drama titled "Who's Afraid of Wole Soyinka?" even if the story was a farcical satire of the military led by Sanni Abacha?

In the picture taken outside his home and as the cameras rolled, Soyinka talks to his audience flanked by me (left) and Funmilola Iyanda (right).

Wole The great!!! My brother, my friend. It's been such a long while, but i am glad to see your work again. How goes things? I have bookmarked yours blog, look forward to future reading!!
Cheers,
Gbolahan (ex-newdawn)