Had first seen this photo on mona's blog before my brother sent it to me. Apparently, its owner came prepared to the mosque, a place where you have to leave your footwear alongside hundreds on the outside of the building. 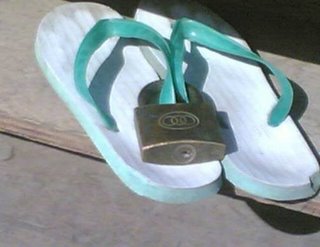 Also heard on sky news today that the remains of one Private Venn of the British Army who went missing in action in 1944 during the 2nd World War were found in the grounds of a Housing Estate in Arnhem, The Netherlands. He was identified by his dental records in Britain. Yeah, a man who died more than 60 years ago had dental records still in existence. The forensic experts from Britain confirmed his identity through his chipped front tooth amongst other things and he was given a full military burial.


What about us? A country without a criminal database more than 46 years after independence, without fingerprinting technology (they had to import people from Britain over Funsho Williams's assassination), where statements of suspects are kept in handwritten sheets in dusty files and can be pulled out and burnt after a short while by those able to pay for these services?

Policemen at a checkpoint today stopped me as I drove two females to a prior appointment. "Come down", a dimunitive one in oversized clothing said, "we are here for stop and search".
I told him it was unfortunate he would be unable to search the females as he had no female officer beside him. He said with confidence, "But I can search their purse and their hair". Acording to him, a female was caught with 5 machine guns and ammo a few days ago (did she have these in her weave?), and by December, male police in Nigeria would be able to do full cavity searches of all females 'apart from their private parts'. He said, "after all, we're all adults". I decided to let him stew in the juices of his utter ignorance. What use would enlightenment serve on a mind like his? He didn't proceed wwith his search, probably waiting for December.

We are in the Stone-age where policing and security are concerned. If you were to buy a computer today, should you choose less than a Pentium IV? Same thing with the security of the people, the government should start from where the developed world has reached, not trust our fates in the hands of the Nigerian Police Farce (sic) as it is.


Little wonder then, that this man had a padlock on his slippers. It is a metaphor for the country; we must look out for ourselves in the interim.