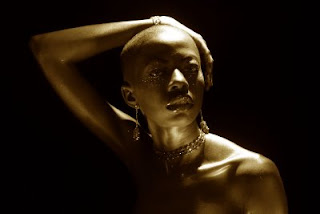 When The Dust Settles

I heard many opinions-

chude jideonwo (The Future Awards) sent a text- "WELL DONE!!!! Dis is the best thing I hav EVER EVER EVER watched in my life. This was genius. Well done Wole. It was TOO MUCH!!!!!" Chude criticizes without sentiment. His comments/write-ups/bust-ups on-line and on the pages of newspapers with art he finds displeasing are legendary.

It was a mix of several things- superb acting, a superb script and ahem...a superb director.

I am honoured that Hafsat Abiola-Costello and Amy Oyekunle, founder and Executive Director of the Kudirat Initiative for Democracy (KIND) chose me to be Artistic Director for this project. That KIND's accountant, Mr.O was always so forthcoming, that Wynyfred and Peju of KIND let me be myself.
I am glad I chose the proper writers for the Nigerian story- Myself, Tunde Aladese (who also performed), Princess Olufemi-Kayode, Ijeoma Ogwuegbu and the irrepressible blogger- Storm a.k.a. Overwhelmed Naija Babe who was in Nigeria last December/January.
I am pleased I selected the proper actors who did more than I could have hoped for. It was team work on their part, a collective pull.
"It doesn't matter which horse wears the garland as long as the wagon gets to town". We found the town, girls!

I am humbled that audiences responded like they did everywhere.

There was a gentleman who was reported to have written on the internet that it didn't "reflect our values" here. That was said of an abuja performance that had the entire Nigerian audience chanting "more, more" at the end of a 2-hour show. If he indeed wrote that (I didn't bother to look at it), it could be considered a little patronizing. Seeing that he's a white man. Chude was one of those who read that piece and lowered his expectations before seeing the show.
I know people write for varying motives. I cannot be bothered with that cultural expert's for it is either he knows nothing of our people or thinks a Nigerian audience not intelligent enough to appreciate art the way he does.

True Love Magazine in it's April issue has a page on me saying "I am Man of the Moment". The words of Rudyard Kipling come to me at this time- "If you can meet with triumph and disaster, and treat both impostors just the same, then my son, you will be a man". We found triumph in this one. I am glad.

I wrote the stage play, "Anatomy Of a Woman", and have been writing the Girl Whisperer column for the Sunday Guardian for close to a year. And now this. If I had known then, what I know now, that most important of relationships wouldn't have floundered.

But when my first child comes, (don't ask me how I know it will be a girl, I just know. And no. No one's pregnant), I'll tell her- "I worked with some great women in the V Monologues project. When you grow, you must become a V. Warrior too".
Posted by laspapi at 1:37 am

i had a great time and omonr is just absolutely fantastic, all the others were GREAT too, i laughed, i cried, it was good! Well done!!

only thing i didn tlike? the male voice over, didnt work!!

I read dt err... person's piece too.. and i was hoping you wouldn't until looooooonnng after this was over.. cos it MADE ME MAD!!!

You know sometimes foreigners in Nigeria who have been in Nigeria long enough, *think * they KNOW something about us. They are convinced that indeed, they have immersed enough of the culture to pass as critics... many mistakes happen after this assumption... lets not get into history and the way the beloved overseas media still portrays Africa / Africans nway, u r wayyyy stronger in terms of receiving errrr.. baseless criticism (my opinion oh!) so. WAY TO GO!!!

For the rest of this post.. all I can say is Greatness is all over you and I'm glad you are MY MENTOR!! *wink wink* hehehehehehe... the part about ur daughter(s) made me emotional... awwww, lol

Hi Wole!
howdy???
i'm woomie, we met briefly @ the National Theatre on wed...u won't remember me anyways.
so here's the thing, you did a wonderful, wonderful job with v/monos and i totally enjoyed it.

I coluld relate in one way or the other with each and everyone of the monos...i'm 19...much younger than most of the ppl there...i dunno if u understand.
i feel 80% of the women who came to watch the show already know their rights as human beings...as women.

How does our young daddy's girl or the girl in Esau's Pottage or Mr.Landlord know that she needs to talk to someone??? or that she can really get help???

you've done well wole...but it's all within the same circle, you get???


I'm one of the prviledged few that got to hear about the show this year...and last yr too...but what's up with the publicity???

wole, somehow, i think my young schoolmates/neighbors need v/mono much more than these women who saw it a NatThe or TerraCulture.
please don't wrap it up...it has only just started...maybe not for you.
but they need to know...really.


PS: who goes on to bag a masters degree in Humanitarian and Refugee studies????
I truly admire you...u must have a good heart.

Hmm. Heard of the Vagina Monologue but never seen it. (You never used the word Vagina. You feel uncomfortable?)
Criticism, sometimes is fair and necessary.
Congratulations on VM's success. Hope it would still be on sometime in future when I'm in the country.

@ 1st Pet- I'm glad I know you too, ScRiBe. Looking forward to the matter you spoke about earlier. I'll call once I'm rested.

@ so so- replied you by e-mail. Those were very strong points. Thank you.


@ tobenna- believe me, I dont mind criticism, as long as its fair. The title of the Nigerian version is not the Vagina Monologues, it's the 'V Monologues-The Nigerian Story'. I have no problem with the V word.

There's one person who took offence that I didn't accept the cultural expert's voice of authority in my post-V Monologues notes. Apparently, what he says for her, is law, even though she didn't see the shows. I do not rove blogs except I know you, too much drivel on the web. Therefore I am under no compulsion to post items placed on my blog by rovers that I might find offensive.

Just for enlightenment and because a little knowledge is a dangerous thing, V Monologues-The Nigerian Story bears no resemblance to the Eve Ensler edition. It's a compilation based on the result of interviews of over 150 women around the Nigerian nation. The transcripts, written and recorded by 5 Nigerian organizations were made available. The stories are ours all the way- from VVF to Child marriages to FGM to the lending of wives to friends, the male child bias, Widowhood rites, Inheritance rites, Incest, our culture of silence, all are dealt with. Things that Ms. Ensler could not touch because these are our own stories.There are no mixes-and-matches. The material is all Nigerian.

However it is not the first time the Monologues have been re-done. A muslim in the Netherlands just a while back wrote "The Veiled Monologues" for women in the muslim community. She did not cut and paste either. Representatives of organizations involved came in from Europe to vet the process. We stayed true to the spirit but told our own stories.

So now, if you come back here, it has become a stalking issue. And I shall not even bother to read it.

Papi,
u guys have done a phenomenal job!
how could i say that without seeing any of the shows?

my mum and sister in law were there and they both had all good things to say.

my mum says she prefers this adaptation to the original one.
she thinks it's more realistic and very reflective of naija.

she said she was aprehensive at first cos "young people" tend to just copy and emulate the west without taking our culture into account. she was very proud of the originality of the show.

hats off to u.

btw, u shud take that much deserved vacation soon.

@ 1stpet- I love you too, ScRiBe, but then you already knew that.

@ Sherri- see the things you do? Your family came to one of the shows and you didn't tell them to say hi? I'm not talking to you.
I'm glad they enjoyed it. We tried to keep it ours and apparently succeeded.

That daughter matter? If I told you, I'd be letting secrets of the Penile Dialogues out of the bag. Men know these things. :D

Is there any way we can watch,ur plays.?I do love intresting plays. From wat am seeing nd hearing from other blogs,it must be fantastic. It will be good,if u have them filmed,so we living abroad can buy them,nd experience ur great work.

Hey laspipi, i tried sooooo soooooo hard to see the vmon, had a date and e'rything! the day comes oh and i'm down with bloody malaria..... :o(

I read JW's on his blog and commented on it. I think he has valid points. Of course I had no reservations about you directing it like some did, if anything I think i know your passion for such things. You made a comment here that I think brought some things home for me, you said this is not eve ensler's play. it's a nigerian telling. I think a prob some of us had was that one, i saw eve ensler's play and liked it. I think there's also a universal appeal to the message itself (i don't think it's necessary to downplay that to tell a nigerian story - not that that's what you did just pointing that out). Maybe it's two different stories but some of us liked the other one too! I was very proud of the other versions last year and some of us thought well, this is good. this is the beginning. and this year we get a sidetrack.....a re-telling.

Still, I have to say unfortunately i didn't get to see it so perhaps I missed an opportunity to change my mind.

PS - JW says a lot of things, anybody that reads his blog should know that his is just a commentary, not necessarily the best one or the most knowledgeable one.

I am still so sad I missed it.
I was terribly ill and about to go on vacation. My luck eh?

A friend of mine (remember her - she had her birthday do at Theatre@Terra) attended and called me as soon as it was over yelling (really loudly I might add) about how brilliant it was and how fantatic you are and how she was upset I didnt tell her sooner.
I could only croak a very jealous sorry.

Hope it was captured somehow though. I am willing to pay good money for a DVD.