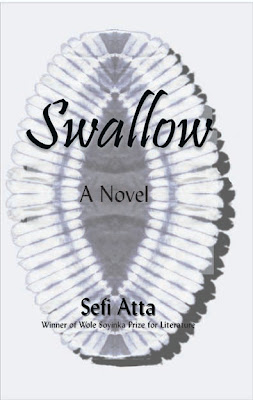 SEFFI ATTA
Kachifo Limited, the publishers of Farafina Magazine and Farafina books, are proud to announce the release of an affordable, paperback edition of Sefi Atta's new novel Swallow in Nigeria. Swallow can be found in all major bookshops.

Swallow is the story of two friends Tolani and Rose; working class girls from entirely different backgrounds with nothing in common except their hustle and struggle not to be crushed by the society. They work at the Federal Community Bank and through their experiences; we see the way people in authority take advantage of those under them and we experience their hardships and frustrations. Sefi very expertly paints a picture of the typical Lagos life like no other writer can. Everyone has their own hustle to which they cling, for therein lies their daily bread or hope for a better life.

In this richly textured narrative, Sefi explores the themes of class and morality. The protagonist is female and displays admirable strength and courage in a world that constantly gnaws at everything she believes in and holds sacred. Her characters are real and we quickly identify with them. We share in their pain, their joy, their hunger and their sweat. They are like our neighbors, our colleagues and our friends. As usual Sefi's prose sings in clean, uncluttered sentences, laden with humor, satire and wit. Sefi blends the past and the present well with her excellent use of flashback such that one flows seamlessly into the other.

She closes with an emotionally charged ending with Tolani overcome with grief and questioning who her real father is and her mother's morality. Though Rose is a lady of easy virtue, we feel her pain because at the end of the day, everyone swallows something or the other to get by. Mrs. Durojaiye swallows her pride, Sanwo swallows his morality and threatens to tell on his Uncle's wife, Tolani swallows her values and beliefs and tries to swallow more… It simply goes on and on.

"In this unique novel, outstanding new literary talent Sefi Atta takes great strides in style and form, to bring wit and passion to the heartbreaking story of Tolani and Rose, two young women struggling, not always successfully to make an honest living in contemporary Nigeria… Atta tells in an eminently readable voice the irreconcilable nature of two friends' fates."

"Tender, fierce, vivid and memorable – a bold, distinctive novel from a writer who doesn't compromise her integrity."

"The bustle, chaos and fast rhythm of Lagos jump from the pages of Swallow, Sefi Atta's new book. It is fiction steeped in life."

Veronique Tadjo, author of As the Crow Flies

"Sefi Atta has woven a quietly intricate powerful tale that pulls from problems of gender, class and Lagosian life. It's a novel whose many colorful characters, compelling story, distinct place and turbulent time will stay with you long after you've read the last word."

"Sefi's Swallow is a triumph of the terse. It throbs with laconic intelligence and the veritable Sefi Atta denoument."

Tade Ipadeola, author of A Time of Signs

Sefi Atta was born in Lagos, Nigeria in 1964 and was educated here, in the United Kingdom as well as in the United States. A former chartered accountant and CPA, she is a graduate of the creative writing program at Antioch University, Los Angeles. Her short stories have appeared in journals like Los Angeles Review and Mississippi Review and have won prizes from Zoetrope and Red Hen Press. Her radio plays have been broadcast by the BBC. She is the winner of PEN International's 2004/2005 David TK Wong Prize and in 2006, her debut novel Everything Good Will Come was awarded the inaugural Wole Soyinka Prize for Literature in Africa. She lives in Mississippi with her husband, Gboyega Ransome - Kuti and their daughter, Temi.

Available also on amazon.com
Posted by laspapi at 8:22 am

I LOVE Sefi Atta!!! I read Everything Good Will Come!! I'm DEFINITELY going to get this. Love your blog by the way!!

Will most def' get a copy this weekend...
I love Nigerian authors...sometimes it doesn't matter what they write about...the fact, THEY'RE NIGERIANS...THEY WRITE...WE READ.

Oh cool...Looking forward to getting a copy of this...

so where can we get the book??
u heard about Mrs Club??after all the hype about at book,i dont even know where to find it!!
hiya doin???
Hmmm,so we are seeing the whisperer next yeah??be slottin in some more relaxed things for us naaaaaaa bros!lol
takia

@ Qmoney...check out any Numetro Media Store...@ the Galleria or Shoprite...oh! dat's if you live in Lagos.

I must get a copy of this novel. That's if my boss does not get it first.

Btw you refuse to answer my question. If I were to be aborad Oprah would have organised how I wld meet Soyinka!!!