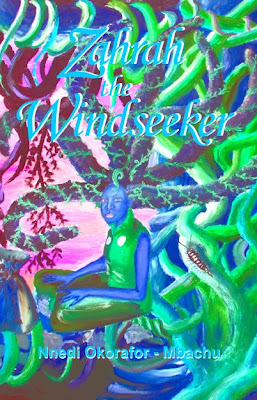 Kachifo Limited, publishers of the Farafina imprint is pleased to announce that one of its writers, Nnedi Okorafor – Mbachu was on Sunday, November 2, 2008 awarded the prestigious Wole Soyinka Prize for Literature in Africa. Nnedi's award winning book, Zahrah the Windseeker, was published by Farafina in July 2008. The award ceremony took place at The Ballroom - Eko Hotel and Suites, Victoria Island, Lagos and the Nobel Laureate, Wole Soyinka, presented the award in person. The prize money which is $20,000, is administered by the Lumina Foundation.

Also present was one of the other finalists, Wale Okediran, author of The Weaving Looms. Uzodinma Iweala, the third finalist and author of Beasts of No Nation, was unavailable.

Nnedi has several short stories which have been published in anthologies and magazines. Zahrah the Windseeker is her first novel. It is a tale of adventure, friendship and courage. Nicely illustrated and beautifully told, Zahrah the Windseeker makes a good read for both adults and children.

The recommended retail price is N1000 and it is available in all major bookstores in Nigeria. It can also be purchased online at www.kachifo.com or at Kachifo Limited, 8th Floor, SIO Towers, 25 Boyle Street Onikan, Lagos.
Posted by laspapi at 4:30 am