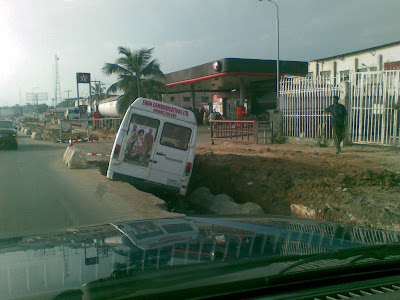 Was driving to Victoria Island on the morning of the 2nd of November when I saw this. The driver of the van had run off the road into a large ditch 'created' by the government's construction workers. The problem is not in the 'cutting' of Lagos roads as former Governor Tinubu's billboards used to creatively describe the act; it is in the lack of warning signs and street lights at night in Lagos.

Lagos drivers move at night with full beams on and add any extras they can find because the death traps that masquerade as roads are ill-lit (while of course blinding other road users in the process). I have driven down an Ikorodu Road that was a black as soot, done the same on the 3rd Mainland Bridge, while praying, hoping...

A few days ago, an officer of the Federal Road Safety Corp stopped laspapi and said it was an offence to have fog lights on your car (a jeep in this case) because the car's lights were already powerful enough etc etc I didn't get the ticket because I told him (with a staight face) that I didn't drive the car at night and I had no idea about the law which bans car lights that can save your life.

Fashola is one of my favourite all-time governors but he's responsible for situations like this.

the gov should caution the road workers......puttin reflcetin signs to indicate that constructn work is goin on isn't so expensive!!!.......those tapes are absolute crap!
Lol!!! the road safety guy prob wanted to eat off u....the guy is a joke!
trams in 1906!!!! wow!!! my greatgramma would hav seen them back then o!!! Lagos needs more hard work!

I'm sure street lights are on definately of d good fash's agenda. Hopefully d darkness will b drowned out sooner than later.


Nigerians need more light on the roads....hey Ive been there and the driving there is insane

Why? So they aren't sued. The legal system needs to be revamped if you ask me. In most places the truck guy would.

PS: Your RSS doesn't show the story title. Dunno why? Please look into it.

the destruction of lagos will probably take 10 years' of fast-paced work to rectify. At the rate we're going, it will take 80 years or so (assuming there are no set-backs, which is unlikely)

having started on that pessimistic note, fashola is easily the best leader amongst the 36 states and the fct

Lagos death traps called roads! no comment. Im sure you already know the heavy traffic those construction are causing.

Went thru Sango/ota last weekend and i mumbled a curse for my uncle (ojb). that place is a disaster.

is the metroline project still alive?

how u dey Papi?

Lagos roads can really be the valley of the shadow of death.