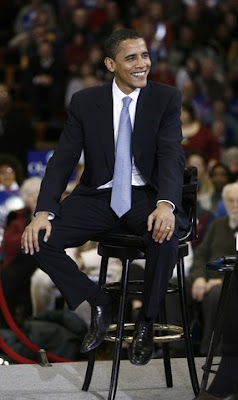 It’s 5am now and I am watching what has delayed the writing of this article, play out before my very eyes. I am half-seated, half lying, watching the television screen, watching one of the greatest things I will ever see, unfold. An African-American has become President-elect of the United States. In the primaries, I was in support of Hilary Clinton, primarily because she was wife to the ultimate come-back kid, Bill, and I wondered if the smooth-talking, charismatic Obama could lead the Democrats to the Promised Land.

There were many things that appeared to be disadvantageous to Barack Obama. The most obvious was that he wasn’t white. Another was that he had a Kenyan father (and family scattered around hinterland Kenya). His Kenyan grand-mother looked just like any regular African grandmother (Africans will get that) and he wasn’t very experienced at the foreign policy level. I seriously doubted if mainstream America would take him for what he was. His defeat of Hilary Clinton made me sit up. America truly is a strange land and we all have a lot to learn from the people of that country. In my state of origin, Oyo, a half-Ghanaian would have a hard time convincing people he should be governor.

Back on the television, I can see the Rev. Jesse Jackson crying silently, he who marched alongside Martin Luther King and ran for the position of President of the United States himself. He weeps for joy and for the fact that his fellow Americans have done the impossible. I can see the talk-show host, Oprah Winfrey, crying softly too and I am listening to the Senator John McCain who fought a long, hard and bitter fight, accept his defeat in a manner so graceful, I cannot believe it is the same man who was once Obama’s opponent. I know this is a moment that will be with me forever. McCain’s most striking words, ‘America has decided.’

I can see Barack Obama walking to the podium to give his acceptance speech, his wife and two daughters beside him, and now I truly believe the phrase, ‘Yes, we can!’
I hear him give the example of a 106-year old woman who endured the elements to stand in line for hours so as to cast her vote in Atlanta, a woman who was born just after the days of slavery and who has seen America evolve into what it has become now. And I hear Obama ask, ‘what will our children think of how far we have come in another one-hundred years?’ Not many people will have the answer to that, but one thing is certain; the process has started. Americans, despite their diversity, the medley of races and tribes have shown why they are known as the United States.

They have come together to choose a candidate, confirming that democracy still works and it is a thing of great beauty. The choice is clear and unequivocal. It is loud and resonant and it is one name that sounds over and over again, the name of Barack Obama.

Today, I am lifted above the mundane, taken to a level that shows me the entire world through new eyes and I have learnt a very major lesson with the minimum amount of fuss; the majority of people will do what is right when it matters the most, if you let them.

This moment in history for me is not just about African-Americans over-coming hardship and prejudices, for white men also marched alongside Martin Luther King and fought for the abolition of second-class citizenship on behalf of the African-Americans. The old, the young, new voters, liberals, Hispanics, formerly apathetic African-Americans, whites, blacks, all rose to accept and elect him; it is a victory for the world, for humanity, a victory that shows us we have come a long way from the back-waters we once nestled in. There are many countries in the world where such a feat would have appeared impossible a few days ago. Not so anymore. With this victory, the world’s peoples are lifted higher and nothing seems unattainable now.
It is a victory that makes me feel proud to be human, that lifts my spirits high and shores up my belief that there are truly no limits to what one can do, if you believe. This is about the American people becoming one entity and showing the world the way to go. It shows we have the innate ability to rise above pettiness and prejudices and be all we are meant to be.

What we can take from this? There is a core of greatness, of elevation above meanness, in all of us that we can latch onto; a core that can take us above prejudices and lead us to a point where we can become better people.

There are things that are more important than colour, creed and tribal differences. There are life-changing choices we will be faced with, that should not be hinged on mundane factors but on all that is decent and just. Today, in accepting his election, Obama reached out even to those who did not support him and asked to be their President too. The world became a very different place today, and it is a truly obtuse person who will see this election outcome on a superficial level or refuse to see that we have reached a point we should never again return from.

Obama bears the torch for a future of promise, for a world that is moving on to a level much higher than where it once was, and I am glad I am alive to see this moment.

Labels: Obama, Yes We Can

It is no longer Yes we can, it is now Yes we did. But what a night it was. What a night.