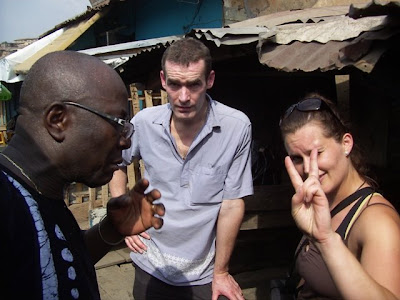 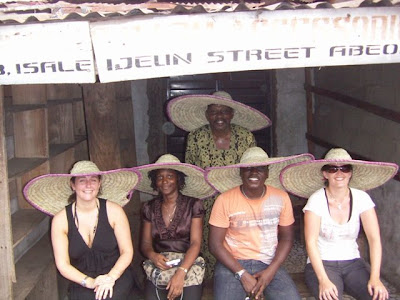 laspapi was made a consultant to the British Council and the U.K.'s National Arts Theatre. It's in anticipation of the upcoming run of Wole Soyinka's Death and the King's Horseman. The play will be produced for a mimimum of three months in England, starting April.

Since Monday the 2nd of February, some members of the crew and I have been to Abeokuta (2ce), Ibadan, Oyo town and Badagry. We returned to Lagos at the end of each day.

The crew's met with Professor Soyinka in his Abeokuta home, shopped for enough clothes and props for the show to open a well-stocked store and generally learned much more about the Oyo (Yoruba) culture and the play itself.

I'm looking forward to the production. In the top picture, the London-based Nigerian choreographer, Peter Badejo (O.B.E) who's part of the show discusses with the director of the production, Rufus Norris, and Sabine LeMaitre.

In bottom picture, seated from left, Katrina Lindsay, production designer and 2008 Tony-Award winner of best costume designer for her work in Les Liaisons Dangereuses, Olamipo Bello of the British Council, laspapi and Sabine LeMaitre try out their new hats purchased on the streets of Abeokuta
Posted by laspapi at 8:28 pm

'Seems you have much fun and work on your hands.

congrats!
how u dey?