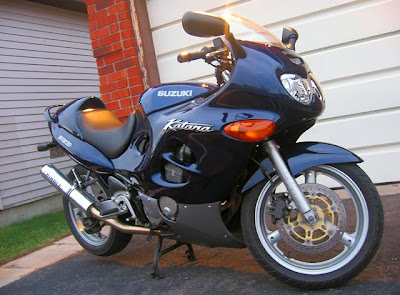 THE LIMITATIONS OF THE WHISPERER

I parked my bike at a petrol station a while back, waiting to meet up with the dulcet-toned Kaka, the female voice in D banj’s smash hit, ‘Fall in love’. It was getting late and I looked out again and again at the major road that passed in front of the station. And then my phone rang, it was her and she was already there but couldn’t see me. I looked around, saw her and waved, and she began to walk towards me.

I ride a rather large motorcycle, a Suzuki 750cc called a ‘power bike’ by the everyday man on the streets. It’s a wild beast, and when riding, you can feel it pulsing, barely restrained from tossing you into the nearest gully. In the very early days of riding (I was one of those foolhardy enough to buy a bike before learning to ride), it threw me into a couple of walls; I bruised a few ribs, injured a forearm, damaged a shin, had a few other ‘minor’ abrasions and many escapes from being maimed. I thereafter, learnt the wisdom of wearing protective gear. You know the sort that makes you think Spider Man just sped past; a proper helmet, not the paint-buckets that some commercial riders place on their heads, black leather gloves with hard plastic etched on their knuckles, a jacket with protection over the chest area, the elbows, the forearms, the shoulders, the spinal cord area; and to cap it all, shin/knee guards, just in case I had an uncontrollable urge to smash my knees into the tarmac.

That night, as I waited for Kaka, I was decked out in the full ‘combat’ gear I just described, a sight to put the fear of God into little children. Our eyes met and she began to walk towards me, smiling and waving as she came. I noticed another female walking rapidly behind her and gesticulating, trying to catch up. ‘Old school friend’, I thought, ‘and Kaka hasn’t noticed.’

Kaka reached me with a smile and said hello and right behind her was her ‘friend’. I showed Kaka the female trying to catch her attention, a female about five feet and three inches tall, dark skinned, passable in the looks department and Kaka turned but showed no recognition. “I’m Shadé”, our new acquaintance said to Kaka, “and I want to get to know you”. I watched in amazement; it was dark, a time when people were hurrying to the security of their homes, there I was, seated like the angel of death in all that gear and this female standing about two feet away, was talking to Kaka as if I was invisible. “I saw you on the road”, she said, “and I liked your hips”. I swear that was what she said. Kaka and I were struck dumb. The girl continued, “Don’t embarrass me; I just want to get to know you. All I want is your number”. Kaka finally found the words to answer, “But I don’t know you”, however our strange guest was undeterred. “It doesn’t matter, we can be friends”. Kaka said, “I’m with someone here”, pointing at me and our new friend replied, “Him?” I knew I had to be in the presence of an alien. I mean, who goes ‘Him?’ when someone points out you’re intruding on a private meeting. This girl didn’t even bat an eye-lid at what I felt was my imposing presence. She acted as if I was a part of the scenery, just an extension of the filling station’s gate or some insignificant speck.

I thought it was time to play the alpha-male part and I addressed our intruder. “Hello, you can see she’s with me.” The rabid girl looked at me and fearlessly asked, “You?” She looked again at Kaka, “Don’t embarrass me, just give me your number”. This conversation was carried out in normal tones as if she was asking what the time of day was. I didn’t know what to feel; anger, annoyance, amusement or worry. One thing I knew however was this girl couldn’t be in complete control of her senses. There had been some compulsion, a driving force that had made her continue to pursue Kaka even though she could tell that her quarry was meeting with someone else. I don’t know how many girls would cross four major lanes at night to search out someone of their own gender and then pointedly ignore the fact that their attention was unwelcome.

I knew it was time to leave so I told Kaka to ignore her. Our new friend stood, slightly embarrassed, and then made her way out of the station. We stood shell-shocked, Kaka and I, and slightly spooked, there haven’t been many moments in my life much weirder than that.

I am the Girl Whisperer, a legend in matters concerning females (let those who will bay at the moon in annoyance at that pronouncement feel free to do so) but that was the first time I would see female on female action at such close quarters. Maybe my Whispering abilities on gender-related issues is limited to those between men and women. My circuits seem to crash when a girl decides another has taken her fancy.

There have been many times I have stood beside good-looking females (Eat your hearts out, I know many of them) and members of my own gender have cast longing glances at them. These men have given looks of frank admiration, smirks, leers, winks and even lustful looks but no one has ever walked up as I stood, completely ignored me and tried to start a ‘friendship’ with the person I was with, not caring who or what the person was to me. It took a female who apparently was in heat, to give me perspective and remind me that there is another side, a side we rarely get to see but which exists nonetheless.

There’s no art to seeing the mind’s construction in the eye, Mr. Shakespeare said.

Apparently tis true that chicks step up to other chicks even in these parts!!!!

I think I get the general gist. It does happen. 'Tis good you stepped up to the plate.

i'm crazy enuff to say it to a hiplicious babe but with you dressed as spider man........

LMHO!!! wow...things are happening
I'm just wondering if she was a star struck fan trying to get attention...but by the way you described the scenario...looks like we have a psycho in our hands!!!Imagine if she wasn't with you...psycho would definitely have stalked her!

lol! lmao...I have never been approached by a fellow woman...i have only been stared at lustfully and it was....ewwwww

Come to think of it, she (ur intruder) may be straight. She may possibly hate ur swagger and want to knock ur game.

...but what kinda girl would stand in the way of a man decked out in his full 'regalia' lmao

I hate her guts.

lmao!! nooooooo!!!! girls are scary these days mehn..like the time my friends and i all went out, me and one of the guys were leaving the place when this girl walks up to us..she had been eyeing our table sincee o, i thought she was checkin out the guy, cuz he fiiiiine!

only for her to walk up to me and be askin for my number, talking about she would like to be my friend..i have detector for bullshit o..i told her myy phone was bad and the one in my hand wasn't mine...she now asked the guy the same thing so it won't be "as if"...he gave her o..as she was going, she saw Mz.Dee, who is too nice to give her a bullshit lie...this girl never ever called our guy friend o...but continued stalking Mz.Dee....

ah, i like your hips ke? egba mi o! hehe

LOL......I get hit on by the ladies a lot...I thought you would be familiar with this...LOL..And its getting increasingly popular and the ladies getting bolder....Ish

girl on girl action right there..

he he he he pekele pekele arugbo je gbese tani o san.

That Shade lady has more than liver, she no dey fear fear (or in this case Angel of death look alike) she must be an 'Elder'.