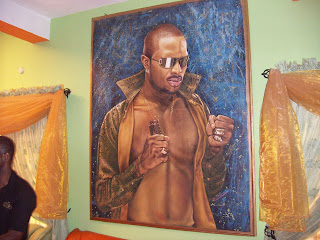 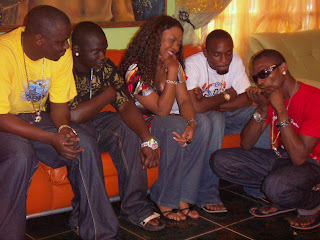 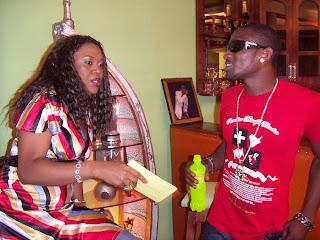 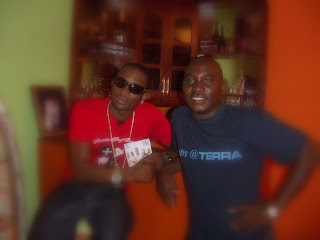 Filming for The Stella Damasus Show continued at the singer, D'banj's home last Wednesday. D'Banj whose ability to entertain on stage (apart from his singing) is his greatest strength, proved to be as entertaining in person and revealed the most incredible things about himself during the recording. He revealed the reason for his song "Mobolowo won" (I escaped from their hands), the extent of his wealth (he's wealthy even by Western World standards, believe me), his relationship with his producer/manager- Don Jazzy, with Tu face, what he thought of old time singers like Sunny Ade and Ebenezer Obe and many other things.

D Banj is the Vice President of Mo' Hits Records of which Don Jazzy is the President. Throughout the interview, Don Jazzy stayed in the studio, a recluse of sorts and content to let D' Banj have the lime-light. D'Banj however firmly believes Don Jazzy has been responsible for the successful direction of the Koko/No Long Thing phenomenon that has swept the nation and can say no wrong of him.

Group Picture shows artistes with Mo' Hits Records. Fron left, the rapper S.I.D. who used to be a member of da Trybe- d Trybes Men collective, Wande Coal who is regarded as one of Nigeria's best voices at the moment, Stella herself, and D'Banj's younger brother, also a singer. Seated on the floor playing his trademark harmonica is D'Banj after the interview.
Posted by laspapi at 11:52 am

I looooooooooooove D'banj, hes so razzz!!!
Who watched his video on youtube with wande coal...lufff it!
Wande Coal..his voice is out of this world!!
Laspapi, you haven't told us more about Stella's show!

It has been awhile since I last visited. Now you are producing art on television.

I have at my blog a post about the Niger Delta from a Marxist view.

I have been linked to your blog a few years now.

@ renegade eye- Its been a while, renegade. How have you been? I actually have a registered theatre company now called 'Renegade Theatre'.

When does Wande's album come out?