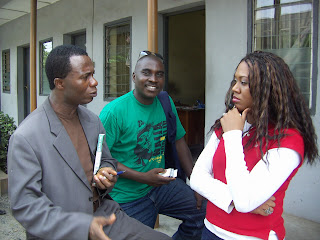 THINGS ARE NOT ALWAYS AS THEY SEEM

I was at the Yaba Psychiatric Hospital yesterday, waiting for Stella Damasus (whose TV show I am producing) and the camera crew, so we could commence the recording of an episode.

As I stood waiting by my car and talking on the phone, I saw a woman in her 30s screaming at a slight-framed old man in his 80s. She, with a baby strapped to her back, said she was tired of taking care of him. She had done enough in her life for him and was tired of eneslavement. He had maltreated her all her life, made her childhood a misery. She said he would have to deal with his mental health problems himself, he and his fat shapeless wife. Her words in Yoruba.

The old man was pathetic and kept on trying to stand by her side but she would have none of it. Once, she slammed him in the chest and he almost broke in two. Karma, I thought. As my more retributive-minded friends who think I'm going to pay for every woman I've run away from would say, "life will bite you in the a*^e in the end. You just wait". For this old man, I thought, "he's getting payback in this world." As they circled my car, she now in possession of the old man's slippers and attempting to maim him with it, she showed me a small wound on her head which she said he had inflicted.

It was apparent she had had enough and called him unprintable names at the top of her voice. A member of staff of the hospital joined me in trying to appease her and that was when we found out from the old man, that she was the person who needed treatment. They had brought her from the Mountin Of Fire Church and she was having none of it. Some statistics say one in ten peiple will suffer some kind of mental health issue in their lifeime. Things are not always as they seem.

As security guards escorted the belligerent woman with the baby still strapped to her back into the deep recesses of the hospital, I watched the old man's wife as she approached and stood in misery looking at her ill daughter, and the old man himself, a little to one side, racked with grief.

Photo from left shows the Chief Clinical Psychologist of the hospital- Marcellinus Nwaogwu, laspapi and Stella after the recording.
Posted by laspapi at 10:13 pm

lol! ok right now i feel like taking a walk 2 yaba left and witnessing some of this drama for myself.
i don't even know who to feel sorry for the delusional lady or the poor old man who received all the beatings and insults..
.. sigh' ..

when will i be back? on blog or in naig?? :) you need to clarify ~groupie~

I am wondering if they had brought her for medical help before taking her for prayers, maybe her sanity could have been salvaged.
It is amazing how much mental ill health exists amongst our people and it is either covered up or ostracized...

PS: I am sorry but that picture is funny. Where you even paying attention to the conversation? You look like one of those passers-by who see a film in production and walk back to wave at their mothers on tv...

i guess the yoruba proverb/saying that says, the day a madman knows he's mad is the day he gets healed is true.
lol at "walk a mile in my shoe" song

we are all crazy papi, well I know I am!however no medicine can cure my type of crazy, I just hafta live tru it and I like it papi, i really like it:)

@ little miss me- The painful part of the matter is that it's more rampant than people imagine.

@ olu- sorry olu, not first. We'd just finished the interview when the pic was taken.

@ catwa'q- the cover up on mental health is a universal thing.

ps. Being the film maker in this case, I didn't have to wave at my mother through the medium. I could have carried cast and crew to her doorstep.

@ sherri- I've had cause to collaborate with the hospital in the work I do, over the years. I have seen double-drop-dead-gorgeous babes come for treatment. This thing doesn't discriminate.

@ cheetarah- I like your kind of crazy, cheetarah. It mkes the world a nicer place.
The premiere of Dr Yerima's play was fantastic. He was in attendance as well.

If you are looking for stories/life lessons from Yaba Apa Osi, you should consult Omo Alagbede. He stayed in that compound for a year

When I think about lunacy, I recall an essay written by Reuben Abati in, I think, late '93. One quote keeps coming to my mind from that essay.

"Madness is a human condition; an element of madness is in all of us"

We all need some form of therapy before / in case things get out of hand!

life isnt always what it seems to be thats one irony we have all had to face.just finished thinking abt my life when i read this post.it was about 7am this morning the weather was almost below freezing point and i just missed the bus.i just tot abt niger. and how u could catch ur bus at any point,haba i miss niger sha.oh well we all have issues just that some are more visible than others from commitment to love to money name it whatever its just dat we all pray dat our issues dont make us objects of ridicule.i can imagine the old mans pain.

thanks papi i will update soon just been ill for abt a week,at least i know some ppl still check me up thanks a great deal

Apparently,no one is immune to mental illness,like you rightly said it does not discriminate.
I had a nightmare the first time i was in a psychiatry ward.
I have deep respect for psychiatrists cos i no fit.

arent we all mental ehn??

ITS A SAD SAD SITUATION. DONT WE ALL MAKE THAT MISTAKE? THINKING WE KNOW WHAT WE HAVE ABSOLUTE NO IDEA ABOUT?

were u in dat conversation papi,just updated

laspapi here's wishing u a merry xmas and a fufilled new year,hope u enjoy ur holidays merry xmas

papi how far with my song

So touching...I remember reading once about the tremendous need for psychiatric services in Nigeria. I think there should be a lot more general awareness of psychiatric issues as well...so much that is misunderstood and mistreated could be prevented that way.

@ comrade- I'll talk to Omo Alagbede. That might explain his take on some things ;p

@ kiibaati- pre-emptive therapy will go a long way, I agree. The psychologists prefer the term, 'mentally challenged' to 'madness' these days.

@ shola- amen to that prayer. We'll hold the fort for you here in Naija till you come visiting.

@ young one- One has to be called to that line of work. I find it diconcerting too.

@ lighty- you got it girl. People give answers when they dont even understand the questions.

@ shola pacheco- thanks for the good wishes, shola. Here's wishing you the very best too. Talk to you soon.

@ acainto- There are a number of organizations working on this now. Hopefully, awareness will get better.

Whoa! How fascinating. 'd already prejudged the old man meself (only i did that in the silence of my mind). You right "....walk in my shoes"
Have a merry christmas, Laspapi.

makes a lot of sense to me, laspapi.

i like that quote, 'walk a mile in my shoe before u criticise ...'. so very true. really, d little i've seen of this world, i've realised that most things are not as they seem. nice post there