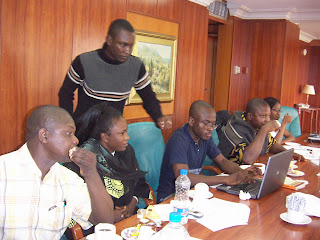 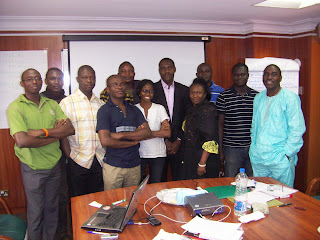 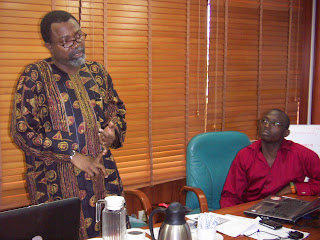 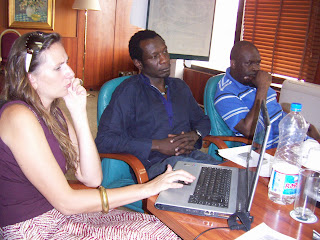 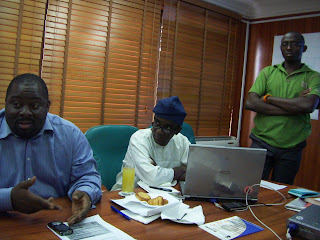 The Committee for Relevant Art (CORA) of which laspapi is a member, retreated into a workshop at the Eko Hotel & Suites last thursday the 24th of January, to plan the direction of the organization over the coming years.

Deji Toye, who co-ordinated the retreat, has proved a real slave-driver, pushing us into the early hours of the morning to touch on matters that affect us all and this organization that has carved a formidable niche in matters of the Arts in Nigeria and beyond.

Conceived by the geologist and arts writer, Toyin Akinosho, more than 15 years ago along with Yomi Layinka, Tunde Lanipekun, Jossy Ogbuanoh and Chika Okeke, CORA won the 25,000 Euros price from the Prince Claus Foundation based in the Netherlands last year for its arts advocacy.

A bonus of all the work-sessions is the ambience of the hotel and the lovely rooms. We might be checking out later today, Sunday, or tomorrow.

What a small small world...You know i work with Deji Toye right?

With all due respect and no offence intended, what are the laptops proudly displayed in the pictures used for?

@ uzo- I had no idea till today, you knew deji. Being co-ordinator of the event, he made us work like Roman slave-owners used to.

@ aladura- that question puzzled me. 'proudly' displayed laptops? Could a 3-day workshop of Nigeria's foremost Arts advocacy group have been done on scraps of paper?