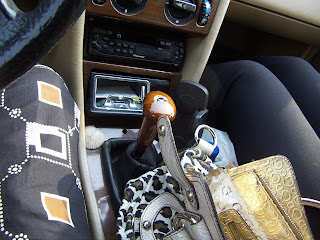 Overwhelmed Naija Babe, blogger extraordinaire and slayer of lesser mortals, was in Abuja and in Lagos for the Christmas holidays. This Nigerian/Canadian and I, first met and developed an extra-ordinary friendship on the web. She loves me and I love her. That's how best I can put it. We've both survived people slandering us on-line and spreading falsehood, obsessing, the whole works and we're still standing. So she called to say she was in Lagos and could I come get her on time for the bloggers' party.

I drove down and met my friend in technicolour for the first time. 5' 11" of solid womanhood and wearing 4" heels to help her see above the crowd. And then we took a drive to Vicoria Island where the party held.

Then we both noticed something strange. It was as if we'd always known each other, like it wasn't a first meeting. Unlike O.J. Simpson, the glove fitted. We chatted, talked, gossipped, I listened to her throaty laugh, and then we met up with the bloggers who hadn't departed- Omo Alagbede, Unnaked, Tayo and the lovely, lovely Scribe who was also home on holiday from the U.S.

Then everyone went to their cars to go home... and mine wouldn't start. The engine turned but wouldn't come to life. I thought, 'I have Overwhelmed in Lagos with me, in 4" shoes, and this car won't start?'

She stayed calm, I was the agitated one because it was already about 10.30pm. We left the car at the restaurant and walked to Akin Adeshola St to get a taxi and on that journey stopped to buy the suya I'd promised her almost a year earlier and 10minutes later, witnessed a fight between an Odua Peoples Congress member and our taxi driver who also claimed to be OPC. For a girl fresh off the boat from Canda, that was traumatic, but I'll leave ONB herself to tell how she reacted there. (I'm still laughing)

On another day out, we stopped the car by the roadside somewhere in Ebute Meta, engine running, windows wound up, to eat the 'ofada' (unpolished) rice we had purchased earlier. There was palm oil stew everywhere but we managed to pull it off.

She's since returned to Canada and I miss my friend. Thank you, Storm, for being whom I always thought you were.
Posted by laspapi at 11:44 am

After reading this, I was overwhelmed about who I missed meeting

and i am secretly hating you for having all the fun when all i got was a phone convo...

lapapi - The girl whisperer strikes again. How did i miss this gathering of bloggers? are you sure you did not conveniently forget to mention it so that you could have overwhelmed to yourslef?

Is she still asking about me or has she got over me already? Do I need to get over myself? Abeg please let us know about the next one oh. I have been trying to plan one with Jeremy but due to schedules it has never worked out.

Papi, Am i jealous or what?

Meanwhile i go fight you o. Why are you giving us the Edited Version now? Let's get a few Bottles of Beer like Men and Gist.... (Drinks on me) lol.

huh papi,no wonder u dont have time for the rest of us again na wah ,lol hope u dont kill me for this comment

All I can say is Awwww!

Laspapiscosco, you know im on your FB friends list right?:D

how nice..seems you guys had a really good time

Aww, that's really sweet... the Carnival on my blog has begun, featuring some wonderful writing, do check it out.

you drive a Benz?( Still thinking about 'Black Widow')

LOL...Funny..oh so I missed the party! I'm sure you had an overwhelmin' good time!

@ martins- yeah, you missed a bit.

@ 2nd Corin- The picture's of our legs, Scribe.
And we will hang out no matter what happens this time.

@ little miss me- we had a great time

@ 'moni- it was overwhelming. How've you been, runaway soja?

@ jaycee- yeah jaycee, we heard you left just before we came in.

all this sugartalk just for me not to tell people what a terribleeeeeeeee human being u are abi... ahh... my rejoinder is coming soon.. abi is it rebuttal self... lol... on the real... love u back.. ur a sweetheart... although i did mean the first part... hehe... how u doing

Interesting reading this. Its strange (and interesting) how one can strike a good relationship on line and then it continues in the flesh so naturally.

awwh, she is truly a down to earth lady,I didnot get to meet her when she came into town but we talked alot on phone and it was good.

same for me for some of the bloggers I met too, it was like we had been friends forever.

...the unveiling (oops, is it meeting?). "...known each other, like it wasn't a first meeting." SO, 'tis true then, "If one is keyed into a particular style of writing, it happens, or one finds there is something about that person that's very familiar,..."
Time tells.

@ all- there were some comments hidden away in my comment moderation box. I didn't get notification thro' yahoo! The yahoo system have thought they were spam.

@ toks boy- I didn't know I'd be able to make the bloggers gig till it was almost the day and even then, ONB's presence ensured my participation. If there's another, I'll let you know.

@ adekunle- you should work for the F.B.I. You can tell its edited?

@ shola pacheco- I'll always have time for you, shola.

@ in my head- my exact sentiments.

@ omosewa- beautiful child, how'd you do that? I'm going searching.

@ afrobabe- we had great fun, babe

@ baba willy- It's beautiful when it happens.

@ omohemi- I was glad ONB and I got to spend time together. It was worth her having me drive around Lagos at odd hours.

@ rethots- Time does tell. I've been keyed into her writing for a long while.

Dearest laspapi, i have a confession to make. Please don't be mad at me. I first heard about you sometime last summer and i didn't like you cos of the circumstances at the time between yourself and a certain person (i bet you can guess); coupled with your outbursts on your blog and cheetarah's then.

I have since been secretly reading your blog and if i'm being honest, i have a very different opinion about you now.

I now perceive you as an intelligent, eloquent and nice person that was unfortunate to get into that situation due to your infectious lovely character (as i have now deduced).

I have learnt a big lesson- and this is not to jump into conclusions before hearing both sides and i apologise for drawing unfair conclusions about you before i got to know you.

This post confirms all my perceptions about you. I have always liked ovnb and all you've said are true. You've both been through the anon slagging. I got that as well and shut my blog as a result.

I admire you laspapi. I admire your intelligence as well. You remind me of Wole Soyinka in a way- not because of the poet in you, but cos y'all are survivors in a similar manner and have still managed to garner respect for yourselves.

The long and short is, i like you laspapi.

Take care of you and keep up the good work.

@ cally waffybabe - That was beautiful. There's a latin maxim- 'Audi Alteram Patem' (Hear the other side). I just thought it was better not to reduce myself to mud-slinging or attempt to reply outright fabrications.
I'm very glad you didn't close your mind to me. That would have been the tragedy.

Good to meet you, cally waffy babe. You're my friend.

Still smiling at the 'infectious lovely character' that got me into trouble.

Nice to meet you as well laspapi. I am your friend too.