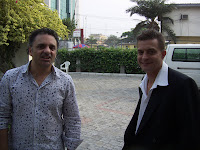 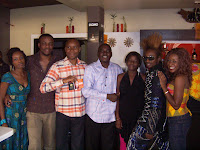 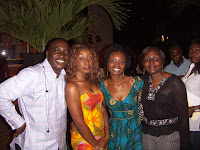 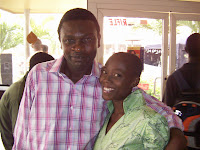 Yesterday, Saturday the 19th, These Genes, (The Sickle Cell Project) organized by Tosyn Bucknor, drew celebrities from everywhere. It took the form of a Celebrity auction and the event, co-hosted by Kunle "Kaboom" Bello of the Trybesmen and Shade Ladipo, had laspapi as the auctioneer. And no, I'm not licenced, but it was really great fun and done to highlight the issue of Sickle Cell in this country and beyond. Also present were the singer, Ade Bantu and his brother, Biodun, the Rooftop MCs, the comedian Tee A, The Future Awards 'Directorate'- Chude, Emilia and Debola, the really cool Cool FM presenter- Gbemi Olateru-Olagbegi and the Bloggers- Tayo and Omo Alagbede.

Some of those I "sold off" to appreciative members of the audience included Godwin Okeke- formerly of the Big Brother Nigeria House, the TV and Radio Personality- Wild Child, the Singer and actress- Ashionye, the TV show host- Denrele, Ebuka- formerly of Big Brother Nigeria and now a TV show host in his own right, the Events Planner-Funke Bucknor Obruthe and the Channels Television presenter, Lamide Akintobi.

ps. They had to restrain me from kidnapping lamide who appears beautiful on the screen but is even much better in real life.

It didn't take me long to notice Lamide.

It's a great project... hats off to Tosyn. Laspapi, there's a Carnival kicking off over on my blog tomorrow... do check it out and participate...

Hey you... I thought of you during Cote D'Ivoire Vs Nigeria. Hope you're keeping the spirits up, there's still a ways to go.

@ renegade- ah, you have an eye

@ babawilly- we had a great, great time

@ r- That match was terrible. Still, we're a mite better than Cameroon. That team got mauled by the Egyptians.

heartwarming to see this generation raising awareness to a worthy cause

You could have added the 'cost' of the celebrities at the auction. Would have helped us know the 'net worth' of each of them

@ sherri- glad it does, sherri. It's a worthy cause.

@ comrade- we tried to avoid publicizing one person having more value than another.