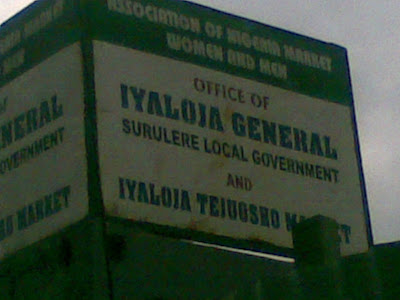 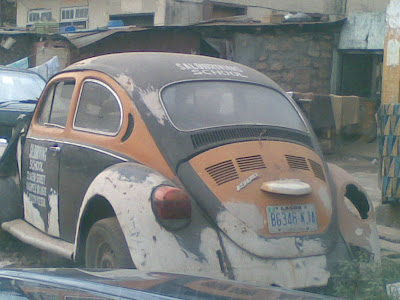 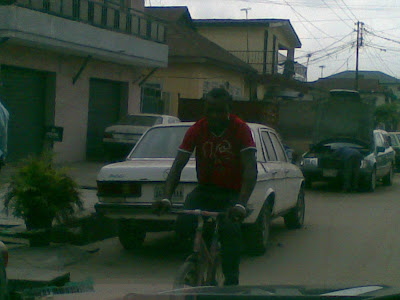 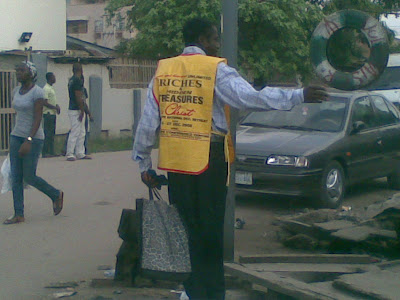 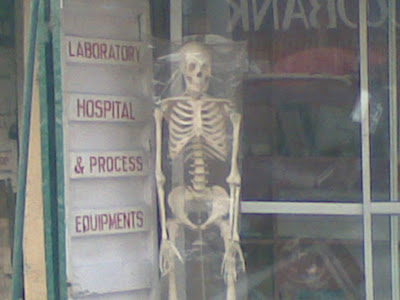 Took photos with my phone as I drove down to the office. Top pic shows the only structure left on the formerly crowded and claustrophobic space that once housed the Tejuosho market at Yaba. The 'Iyaloja' or female head of the traders stakes her claim on the new edifice she believes will rise up there again.

Pic 2 is a driving school's vehicle in the Casino Cinema, Yaba, area. Some of the vehicles used for potential drivers are really no different from this forgotten heap.

Pic 3- an alternative means of travel on the busy streets of Lagos. Laspapi owns a bicycle and motorcycle too.

Pic 4- a new approach to advertising Church programmes. This pedestrian acts as a living billboard as hundreds of his church members probably do. I wondered at perspectives and backgrounds as I studied him. I know I would never wear this to advertise a church. But why not? My education? My station in life?

Pic 5- A plastic skeleton on the Ojuelegba road tells of what awaits in its owner's shop.
Posted by laspapi at 3:43 am

i think i know that skeleton

lol!!!!!!!!!!!!!! the last picture sent me rolling on the ground. What is the connection between a skeleton and a laboratory? Like I still don't get it. What suppposed to be an ad or something the same what fashion people put mannequins on display?

The last image is kinda...errrmmm...worrisome! Lol. Is it just me?

Papi....Is the skeleton for sale? So you just go around taking pics? Whats on at Terra this month?

about the moving billboard, i think you won't put that on because it's utter rubbish. Those people are promoting their Church and not God's kingdom. Period.