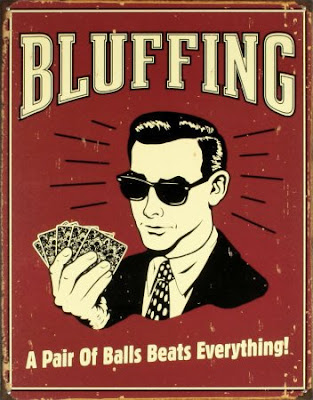 The Bluffer’s Guide to Romance

Years ago, I came across a series of books on bluffing. There were titles like ‘Bluff your way through journalism’, ‘...through literature’, ‘...through publishing’ and a few others. It struck me then, how many people go through many aspects of life, bluffing and calling bluffs. There are many synonyms for the word, ‘bluff’. They include ‘trick’, ‘con’, ‘fake it’, ‘deceive’, ‘lie’, and ‘pass off’. For the sake of this discussion, we’ll use ‘pass off’ as our alternative to bluffing.

In the Whisperer’s ‘days of thunder’, he pursued a female we’ll call ‘Short Wave’ or SW. He would drive across half the country if she beckoned, totally devoted to all her whims and caprices. This devotion on the Whisperer’s part brought about a remarkable turn of events. SW, the object of the Whisperer’s undivided attention, wasn’t particularly grateful for all the devotion. Time after time, she showed how little weight she attached to the affection she received. Once, after a particularly blatant show of disrespect by SW in which she had been asking after another man she admired in the presence of this writer who-was-not-yet-a-Whisperer, SW turned to him and said, ‘Women don’t like men who are too enthusiastic’. And thus, a phenomenon was born. There is nothing wrong with loving a man or a woman to the death, the problem is ensuring that love and affection is not taken for granted. Thereafter, the Whisperer, a quick learner even then, learnt a life-saving skill and SW learnt from the Whisperer she wasn’t a living goddess after all.

People, as a rule, rarely appreciate what is given to them on a platter and what they do not have to fight or pay a price for. Free tickets to shows are not as well appreciated as tickets paid for. A person who rarely falls ill (the Whisperer is in this category) does not appreciate good health as much as a person who wears the smell of hospital disinfectant like some others do perfume. The person who stays slim no matter what she eats, never fully understanding the joys of this as much as she who has to fight for every kilogram she sheds.

The people you meet on the romantic level and often, in other spheres of life are in some way playing a game with you. If you’re one of those who take life as a tragedy, here’s where your ears begin to emit smoke. But a game it is, no matter how you look at it. The would-be employer who tells you you’re free to answer your ringing phone in a job interview, the boss who wants to see how you react under pressure by not reining in a rude subordinate.

At every point in your life, there are bluffers all around you. The vendor at the market who gives a fantastic price for the product you so desperately need. Your need must never be apparent. And as in all cases of calling a bluff, you must be able to walk away no matter how painful it might be for you.

In romance and love scenarios, there are few people who totally appreciate partners who are so dedicated to them or seem to have no lives outside their partners. You must love your partner, it is true, but you must never forsake building your own life and improving on the things that make you whole, because of another. You, as a person, must be as totally free of hang-ups as much as possible so you can be of benefit to others. ‘He completes me’ is not the stuff of enduring romance.

The Bluffer is the person you meet, who is totally smitten by you upon the first meeting but refuses to show anything. You might be allowed to see a bit of it, but that will just be enough to show the promise of what lies beneath, not reveal that person as one capable of becoming a blubbering idiot because you are in the same room. Bluffers win all the time in issues of romance. When the Whisperer was taking a Masters degree at the University of Lagos, a beautiful undergraduate he had long admired and whom we shall call ‘Thanks-giver’ walked up to him and in the middle of the conversation, uttered the legend, ‘I have no boyfriend’. This was as direct as anything the Whisperer had ever heard. Yet even with the direct admission and ‘green light’ as the more pedestrian like to call it, there was nothing cloying about the Thanks-giver. She was as bright as she was beautiful and she never gave room for her feelings to be abused. You must have the ability to walk away from a bluffer. Not walking away for five or ten days, but walking away for all time if you recognise your feelings are being abused.

The Whisperer totally appreciates Aesop’s fable about the fox that couldn’t reach the delicious-looking grapes on a tree and decided they had to be sour. You must be able to call a bluff, wearing the look of a player in a game of poker. Like the song goes, you must ‘know when to walk away, know when to run’. Or when to hide your thoughts. The Whisperer bought a generator off a very beautiful young woman on Victoria Island very recently, neither having met or spoken before the actual purchase. The first impression was one of startling good looks and he looked at her well (the female form is of great interest to the Whisperer), head to toe, eyebrows to forearms to calves. And then the hood came over the eyes. It must always be standard operating procedure, to bluff, or call one.

Bluffers go far, and you will too, if you don’t wear your heart on your sleeve.
Posted by laspapi at 4:46 am

bluffers hunh? i don't even see d point of bluffing...

"Bluffers go far, and you will too, if you don’t wear your heart on your sleeve."

Bluffing is fun...lots of fun, when your heart doesn't long for a certain thing so deeply.

Don't much care for games myself, too exhausting. I do however practise a form of self preservation that closely resembles what you describe as bluffing, but I don't quite see it as a game. Plus, there's a fine line between so called 'bluffing' and the foolhardy 'posing'. Bluffing is ok for women. In men though, its a trait I find intolerable. I think a man should be ready to put his neck on the chopping block in aid of what he wants :-) If his head gets chopped off, he is built with the unique ability to self-heal and move on. Bluffing guy est tres unattractive...