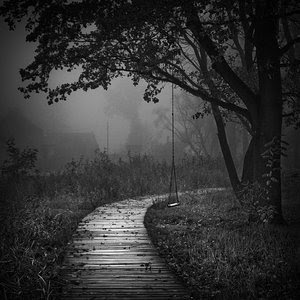 Memories of another Day

I’m sitting up in bed, lap-top open, half-watching the muted television screen showing the Sky News broadcast and my all-time favourite news caster, Eamonn Holmes,a man who seems to exude pleasantness even though I have never met him outside a television tube. Today, my thoughts drift into the distant past and how things used to be. The greatest relationships were those that had no intimacy issues, no sexual undertones, and half of the satisfaction was just being able to say with pride that a certain person was your beau.

I spent a lot of my holidays in the staff quarters of the University of Lagos when I was in my pre and early teen s and so became friends with a lot of the kids growing up there at that time. I also seemed to have massive crushes on all those lovely story-book girls that lived there, and today a smile crosses my lips as my thoughts dwell on each one.

There was Ekaetté who stayed next door to our relatives there and was my first ‘girlfriend’. The manner of our ‘love’ for this then-twelve year old was such that I would get full like a person who’d just had a large meal just from watching her walk past. There were the sisters, Yemi and lola (Yemi, I hear, lives somewhere on the island now) Yinka, Mopé who became an engineer and the lovely iféchukwu and her equally beautiful sisters. Iféchukwu’s father would answer the phone in a deep bass voice, announcing his surname in two syllables. It took a secure youth not to hang up the phone after that voice. There were the sisters, Bunmi and Taiwo, Bunmi is a corporate big-shot now according to the newspapers, the snazzy Uzo who didn’t really stay on campus but was a great friend of those who did, and Tola, the student of Queen’s College who was my ‘school mother’. I thought Tola was the most beautiful school-mother in existence. I wonder where she is now and what she’s doing.

Those were the glory days of love, friendship totally without guile and lacking any ulterior motives. For me, those friendships were genuine as were the professions of ‘love’. When I consider the subterfuge and manipulations of ‘grown-up’ love, the plotting and subversions, I long for the days when the grass smelt green and your friend really was one in word and in deed. Now, as in all other areas of life, these kids are scattered across many continents, some bracing for the harmattan winds, and others against the bitter cold of winter. Adulthood is funny, the time when you can make rational decisions for yourself, and more importantly, stand by those decisions. The environments we often create as a result of our adult decisions however are often ones that leave us in the bleak states we are forced to inhabit, states where we are forced to endure a lack of genuine love and friendship. Maybe it really is true then, that everything we needed to learn, we learnt in kindergarten. I cannot call to mind many friendships that are truer than those I found in my teens. It may be that the template is one that is developed at a very young age and as we grow older, our newer experiences make us forget we once knew the magic formula. Now I remember John Borough’s verse- ‘To his sorrow he learnt this truth, you may return to the place of your birth, you cannot return to your youth’.

I recall the problems that video cassette recorders caused by coming in two forms, VHS and Betamax tapes, and how VHS gradually won the war, bit by bit, step by step. And now with a wry smile, I remember that even these are long gone, assigned to the dusty heap of obsolete inventions, replaced by the DVD, and there is now an entire generation that never experienced the VHS.

In the corridors of my mind, I walk across the grassy lawns of the road that was known as Eni Njoku and then renamed Oritshejolomi Thomas. I stroll down the lonely, tree-lined roads that lead past the house of the quiet Orode, and come across that beautiful child known as Tayo, Yinka’s sister. There are many memories on these roads as I walk; the winged termites that would fly against the golden street lamps that illuminated the night streets, the click-clacking of the legs of crabs on tarmac as they came out of the marshy woods and marched down to some nameless destination. I remember watching the James Bond movie, ‘Diamonds are forever’ in the quiet, dark theatres of the University, and the long walk with my cousins back to their home.

One of the greatest things parents can do for their children is to help them have great childhoods through keeping friends that are true. As children, there was little or no wickedness in the things we spoke about and did. Sometimes in my mind now, when I come in contact with road rage, malice, rumour-mongering or some other form of ‘adulthood’, I make myself immune to these external onslaught by creating a shield that is woven out of memory. I remember the times we would sit by the lagoon and look out at the placid waters, and talk and make plans for a future we believed would be ours for the taking. I remember the comic books, ‘Buster’ and ‘Battle’ and ‘Crunch’, ‘Roy of the Rovers’, ‘Tiger’ and ‘2000AD’, and I know I will never stop smiling. Adults must never taint the lives of children by intruding in this period of development, where character is forged.

I may never be able to return, physically, to those great days, but I can sit and reflect and muse on the beauty of days long gone, and promise myself, that my children will have at least as much beauty as I found in my childhood and much more, if the Lord allows.
Posted by laspapi at 4:56 am

*I may never be able to return, physically, to those great days, but I can sit and reflect and muse on the beauty of days long gone, and promise myself, that my children will have at least as much beauty as I found in my childhood and much more, if the Lord allows.*

Now this is gripping!!!
and Amen...the may the Lord allow!

'I cannot call to mind many friendships that are truer than those I found in my teens. It may be that the template is one that is developed at a very young age and as we grow older, our newer experiences make us forget we once knew the magic formula.'

True talk o! I remember my dad telling us before we went off to secondary school how the friends we made then will be our friends for life.

Yes o childhood memories are so precious every child and adult should have a bag full of pleasant memories to dip into whenever they like. What keeps me going these days are the precious store of memories from my childhood. When I have no reason to smile I look into that bag and I begin to feel better, Olorun a ran wa lowo to give our children even better memories than we have even in the face of economic downturns or increased violence everywhere! Plenty talk for now!

...my mom used to pray that we find the right friends (she still does tho)

I loved reading this. I'm a born and bred Unilag child myself so I know every single person you've named here, apart from 'Uzo'. Yemi and Lola are my cousins and Tola your 'school mother' if her last name starts with A was my neighbour. She is a dentist and is married and living in the US now. As you probably already know, Tayo and Yinka are both married now and live in Lagos still. So are Chukwu and every last one of her sisters.
I frequently pine for my childhood years. My sister told me on Friday that I am a 'constant victim of nostalgia'. She wasn't wrong. Growing up when and the way we did was such a beautiful experience. I wouldn't trade those early years for anything...Thanks again for a lovely read.

:D interesting read...and very true. I think altruism departs from friendship once one becomes an adult. It may still be found in relationships at University level...I found great friends in Uni...but usually disappears after that.

May our kids find the same level of beauty, trust and friendship which we have known in our own childhood.