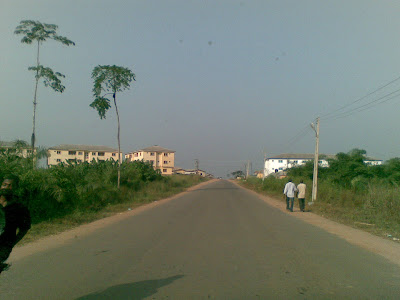 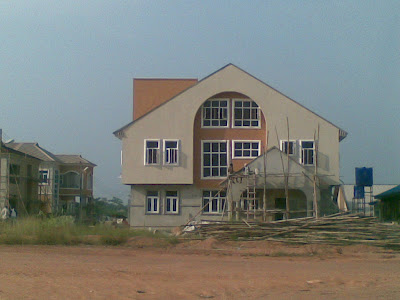 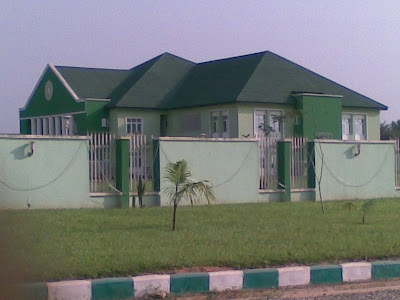 I drove into the Redemption Camp today, almost a decade after the last time I was there. The changes were enormous, sprawling edifices everywhere and accommodation for church workers and apparently any others the authorities see fit.

The planning is impressive and shows foresight. And it creates the impression of a city within a city, a place with its own government, far away from the anarchy that sweeps across urban centres like Lagos from time to time.

These houses among others, caught my attention but there were many other well-constructed places that weren't as expansive.

Outside the green house which reportedly is the accommodation of the General Over-seer, Pastor Enoch Adeboye, but which is still uninhabited, I noticed a female who appeared deep in prayer or meditation. As I drove back fifteen minutes later, she was still there, still concentrating, lips moving just outside the deserted house and it crossed my mind she was trying to reach her Creator in some way and felt that would be a good place to meet with Him.

And I remembered a story I heard thirteen years ago, of a woman who desperately wanted a baby, and wrote a letter to God. She didn't post it, but waited for a programme she knew Adeboye would attend and then slipped the letter under the door. Her theory- God would be where Adeboye was. Apparently, the letter was delivered because she was reported to have had the baby.

My name is laspapi and I make bold to say there are a number of 'church' leaders I contend are frauds. But I believe Enoch Adejare Adeboye even though I am not a member of his church. And this country would be a better place if there were more like him.
Posted by laspapi at 6:56 pm

I also believe he's a man of God myself...I wish we had more men like him too...but can we pay the price?...he didn't become that way overnight...it took a lot of work and sacrifice on his path...The finished product always looks good...but the forming and molding...can be painful atimes...I wish more men will submit to the forming and moulding...

"But I believe Enoch Adejare Adeboye even though I am not a member of his church. And this country would be a better place if there were more like him."

Ah Laspapi! You will soon tell me the Pope is a man of God.

have d habit of going back to re-read articles on blogs i love... randomly selecting dates, i came by dis article and am wondering, r ur sentiments still d same?

do u still believe in d 'living legend'?...pray tell