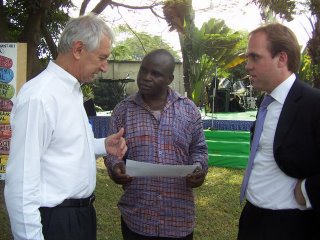 The Committee for Relevant Art, CORA, (of which laspapi is a member), was the recipient of the 25, 000 (Euros) annual Prince Claus Award. The award named after the deceased husband of the present Queen of the Netherlands, is given by a government-backed foundation in the Netherlands to deserving groups or individuals worldwide, on the basis of art advocacy.
In the picture just before the event which held on the grounds of the Embassy of the Netherlands in Eleke Crescent, Victoria Island, are (from left) His Excellency, the Ambassador of the Netherlands to Nigeria; Jahman Anikulapo, Chairman of CORA and Editor of the Guardian on Sunday; and Mark Rutgers, Second Secretary (Political Affairs) of the Netherlands Mission.

Congratulations to all the members of CORA. Isn't that a clue for some ministries to do something? Euro for Euro, and then double the whole amount, 'cause that's just a few barrels of oil.

His excellency? Not you too!!!

I wish those in power looked at things that way. They're utterly clueless which should show us its God's grace that's led us this far.

'His Excellency'? Yeah. That's what Ambassadors are called, I believe. I'd call the Pope 'His Eminence' too. Respect to whom respect is due and all that.