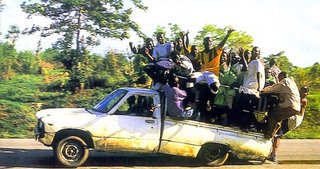 Fame! Fame at last! The A-Z of Nigeria was culled from this blog and published by The Guardian on Sunday, December 17. (The publication stopped at the letter ‘J’ and it said ‘to be continued next week'). Now if I ‘disappear’, you’ll know it’s any one of the many people/organizations I referred to, that had me done away with.

Was passing in front of my TV a few days ago when this programme came on telling the 50 favourite things people wanted to do before they died. “This should be interesting”, I thought, and found a comfortable position to watch from.

Among the top 50 were desires to see the Great Wall of China, visit the extremes of Canada to watch Polar Bears, take a train ride on the Orient Express (I thought that was an Agatha Christie book) and take a trip to the Rockies. The topmost desire was to…wait for it….swim with dolphins.

‘Whose top 50?’, I wondered. What we have here is a problem of perspectives and now I see the reason some say I.Q. tests for people from different levels of national development should vary. Make no mistake, all men are born equal, (apart from Nigerians who are smarter than most).

But swim with dolphins? What for? They can tell if a person is pregnant? So?

It tells a lot about developed nations and systems that work, when people can have the luxury of 2nd mortgages on their homes so as to see the World Cup. (Supporters of the Republic of Ireland did this).


There are things my fellow countrymen would like to have before they die and seeing Polar Bears is not one of them. When we have the basics, maybe we can think of such things, then.

Here are 10 of the more pressing, in no particular order-
1) Have constant electricity. Not having to beg some drug-addled marauders dressed as Electricity Officials who climb up and down tangled electrified cables on poles, connecting and disconnecting power supply at will.
2) Own a car no matter how old. While waiting for the car wish to come true, have a transportation system that works, not molues driven by drivers high on shepen, paraga and so’ku d’aye* (*raise the dead: it’s an alcoholic beverage too)
3) Have a city where the policeman will not rob you at night or the LASTMA official by day. (i.e law enforcement agencies that work)
4) Have roads that are tarred and repaired properly.
5) Have heavy traffic intersections controlled by traffic lights, and not psychotic vagrants (lunatics), drug addicts, cripples, dwarves with bloodshot eyes and ex-area boys. (I’ve seen examples of all these)
6) Have a judiciary respected by the government.
7) Have a health care system that works.
8) Own one’s own home.
9) Be respected by those elected/selected to serve in government.
10) Eat 3 meals a day

@ 10 things our country people will like to have before they die,

Thanx nilla. We probably have 1000 things but we'll start with this.

Amen to all that, especially the last one...

once again, Lord help us in Nigeria!

Nice one, Nice one!...but u did not include seeing a country where electoral votes will count..either at primaries or in general elections.That's basic.Nice one Laspapi!

Only 3 of the items you mention on your list of things to do have anything to do with you, unless of course you want to become Nigeria's next President.

We are going through rough times in our country which is more the reason why we should seek peace, escapism and adventure outside of ourselves every now and again. Madness has its place but only in small doses.

Swimming with Dolphins sounds nothing short of divine to me. Also The Orient Express is indeed an Agatha Christie novel which I lived in years as a child.

I know that such adventures seem like luxuries in a country like ours that lacks even basic infrastructure. But within our means let's dance in the rain, drive to Cotonou, fly to Jos or spend a weekend in Accra.

I am definitely leaving this mad city for the holidays. Off to Ibadan on Friday and then Dakar on the 27th. I shall explore Senegalese markets and Gore Island and escape into another world so that once again I am recharged to deal with the madness of the country I live in.

Thanks endi. Counting electoral votes both in primaries and general elections? We Pray.

@ anonymous Ebun- Peace, escapism and adventure- I regularly seek these too. Escapism could also be termed 'denial', I think. Dancing in the rain-(I did a lot of that as a child), but now I think of the cost of healthcare if I catch pneumonia.

Ebun, I hope there's light at the end of the tunnel.

We all have different ways of coping. I write stage plays.

I shall be there on the 26th to enjoy your end of year adventure.

I enjoyed reading this. I did not know that you sat for an ARMY exam with a cousin. I am happy you did not object to him from copying your answers! Lucky cousin. Just as good he was not admitted after the interview. All is good that ends well. Up Baptacad.
Joe Layode! Very disappointed that no one was able to help a Blind man in such a state. He must have been well known in the 60's. I was, before I left for this ....... land. Anyway, I am midway in my 60,s now, so no complain, as you say in Nigeria.
Wole, A HAPPY NEW YEAR TO TOU & YOURS.

Uncle,
thank you for stopping by here and dropping your thoughts too. Still haven't forgotten the photo. I'll sort it soon. Much love to Aunty.