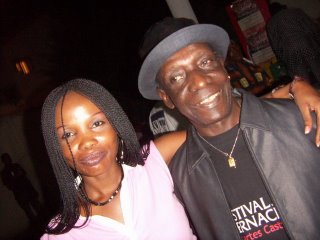 Tony Allen, once one of Fela Anikulapo Kuti's most trusted aides and drummer,returned from Paris where he has lived for many years, for a tour of Nigeria organized by Kayode 'K Samuel' Samuel, titled 'Lagos-No Shaking'. He brought along other foreign artistes (Mostly from France and Germany) to experiment with a fusion of African Beats and European rythms. Adunni (Ayo Orobiyi) of the singing group, Nefretiti who collaborated with the foreign ensemble is a recurring decimal in the pictures because I manage her and Nefretiti. It was an interesting event to be a part of and I danced away my cares (I do have some) at the new location of the French Cultural Centre, 4c Ruxton Road, Ikoyi, Lagos. A considerable number of the members of the expatriate community was there as well. Below are pictures.

Phew!! Just got caught up with your archives...I really did! I just stumbled on ur blog and i'm hooked!! Loving ur sense of humor and love for Arts...Keep it up.
Joke Silva is aging quite gracefuly and yet still radiates beauty!!
Keep it up! Happy Holidays!!

anonymous- wish you'd left a name or something. I'm glad you like the blog, thank you for the kind words.

As for J Silva, she's like fine wine, she gets better with age.

Take care and happy holidays too.