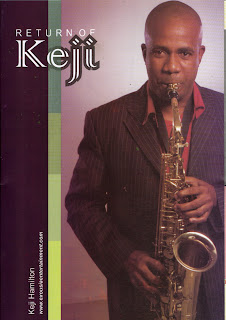 I had a great time over the weekend.

I was asked to MC a concert at the Muson Centre on Saturday, titled The return of Keji Hamilton. Organized by the UK based Charles Akpom of Exousia Entertainment and his brother, Fidelis Akpom, it featured Fela Anikulapo's former band member, Keji (who was the inspiration for Fela's cry "kere keji keke, yah!").

Keji who was part of Fela's "Beast of No Nation", "Army Arrangement", "Teacher, Don't Teach Me Nonsense" and many other songs is now his own man, pastors a church, is involved with the rehabilition of social derelicts but has remained true to the Afro-Beat, but with a strong Christian theme.

Of note also at the event, was the return of Mandy Brown (Ojugbana) of "Taxi Driver" fame, who sang alongside Keji at the event, and whose voice reminded us all of why her song ruled the airwaves for such a long time and can't be forgotten. Mandy Brown moved to the UK a short while after that massive hit but is back in the country now.

Yinka Davies, who without doubt is one of this country's best products ever, complemented the event in her "usual unusual" style, doing an impromptu duet with the music producer, Cobhams Emmanuel Asuquo.

ps. Mandy Brown is happily married to a prominent blogger, but he'll have to tell you himself. It was a pleasure to talk to him at the event.

Then I got into my car and drove to Kayode Krakue's birthday bash at his home which was filled to the brim. All the usual suspects, the actor- Bolaji Alonge, the TV producer and director- Kayode Peters, the comedians- Basket Mouth and Talkative, the Musician- Rugged Man and many many others made the place great fun. I also ...ahem... learnt that the new dances involve close contact between the male and the female, the female doing most of the contacting. There were quite a number of dance partners willing to teach me. I really must get out of the theatre more.

Sunday was a continuation of Theatre@Terra with Crown Troupe's Dance Drama Performances of "Exodus" and "Monkey Post". Next Sunday (the 23rd) will be the turn of Prison Chronicles, a stage play written and directed by laspapi, and The Sound and The Fury, the week after.
Posted by laspapi at 10:51 pm

I never knew that that Fela cry was inspired by a human being. I always thought it was in symphony to drums...wow, I am enlightened o

U went to party, u did not carry me. Ko buru...I have sha seen the person I will be pestering when I come home

hmm, would be nice to hear gospel afrobeat!

Wow....Sounds like you had a blast...The outside world is fascinating isnt it? LOL

u get to work and have fun at the same time

@ catwalq- when you come home, you'll be the one saying "I no commot today".

@ isi- he knows his music. You'd have loved it.

@ uzo - it is, uzo, but I did one late night/early mor'ing thing in late july (funmi's birthday) and "fear cash me". We were at La Scala club, bouncers built like houses etc My thoughts- "What are they so afraid could come out of the night, that they have to provide this kind of security?

@ kafo- It's the alchemist's key to living forever

Would loved to be at this concert. Sounds good. Please remain some enjoyment in Lagos for us o. We dey come

How come I never hear about stuff like this?

I love that Fela cry!!!
Off to charge my laptop and blog.

(This is yorubatinuke btw. COuldnt be bothered to log in properly)q

sounds like a fun wknd.
is keji putting out an album?

@ atinuke- how've you been? I'll be down to see you soon.

@ sherri- It was great fun, sherri. I think keji might be doing something soon.

From your talk with Uzo, it would appear that you either don't go out much or you don't do night waka. Which is it?

Nice trivia about "kere keji keke, yah!" Off to inject it carelessly into conversation so that I can appear knowledgeable about these things;)

@ in my head- how've you been? I don't do past midnight. Something about the denizens of darkness and the strange things that happen. I like to stay wherever I am at that time, often, thet's my own place. Sounds boring? I'm pondering...