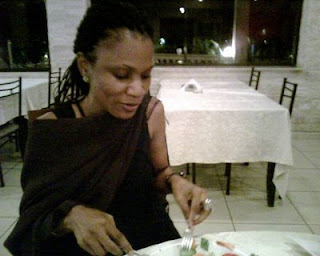 The Spirit In Man

I got a call from Funmi Iyanda a few days ago. The coincidence was I'd typed out my latest Girl Whisperer article a few minutes before, which centred around her philosophy but which hadn't been published in the Guardian yet. She wanted me to accompany her to the Alakara Juvenile Centre run by Magaret Ekpe, the Superintendent of Police whom I blogged about recently.

This policewoman has used her funds as well as all the help she can get to look after babies and waifs no one is interested in, through her juvenile centre. At some point or the other however, all who do this kind of work in Nigeria turn to Funmi. Through her programmes, she's raised funds, created awareness, lobbied governments and individuals and personally helped scores of children and families. I like to see myself as selfless and dedicated to humanity, rising beyond the call of duty when my fellow man needs me. Funmi's works leave me in the dust. Without bothering to tabulate it, she as a person, does in a year more than the average charity orgnization will do throughout its existence.

I am baffled when conversations about this female turns to what she's wearing, whom she's seeing and what prices her shoes are. Do these people know what life is all about?

So I got into my car and instead of driving to funmi's, went directly to the juvenile centre where she caught up with me. I had my comcorder along and tried to film stuff as Margaret Ekpe showed us around. There were children everywhere, and the obstacles faced by this centre were plain to see.

Margaret pointed to a ten year old dark-skinned girl, low-cropped hair, a child you would want for a daughter. She had run from a remand home and been raped by two area boys who caught her some dark night. She was now resident at the Alakara juvenile centre. She was quiet, subdued. As funmi knelt to talk to her, I hung my head. I didn't have the strength to look on. What words could I find for a child like this? But Funmi had. She spoke gently to this child and I wondered.

Another boy, about 10 years old too, who had never walked until he came to the centre. He was reed-thin, head lolling on his shoulders, limbs splayed out on the floor, head resting against the wood of a double-bunk bed, barely able to speak. When his mother died, his family had left him behind at the grave side, presumably to die too. They just left him there and walked away. A Minaj Broadcast International TV crew passing by, saw something in torrential rain as they drove past the grave, and investigated. It was this boy, head barely above the water, fighting for his life, unable to call out for help.
The TV crew rescued him and took him to the centre. He had learnt to walk a bit since then, but often fell, Margaret said.

As I watched, another child-resident, about 8 or 9 years old, put her hand as a rest for his neck that couldn't be kept straight. Then she slid to the floor to sit beside him, put his hand on her own leg and rubbed that hand, a universal sign for re-assurance, that everything would be okay. My camera was on her but in the noise and confusion of all the other kids, she had no way of knowing. The act was selfless and of God.

I thought to myself, "I have wasted portions of my life, for this is what life is about, giving a cruel world, meaning". Not trying to prove to Mr Jones that I'm better than he is because I own a BMW. A child showing another unwanted child that his family might not have wanted him, but she was there if he needed anything, told me all that's important in life.

My friend, Funmilola Iyanda is a great woman. As is Margaret Ekpe, the policewoman. They are lifted above the murk and mire that is so easy for man to wallow in. If you disagree, that's your own shalala. For me, there can be nothing greater than service to humanity.
Posted by laspapi at 8:05 am

yipee!am no 1 hi laspapi,nice blog spent the whole day reading ur posts and ur blog made me feel like an under achiever, like i havent done much with my life but anyway i will use it as a catalyst for change.
would like to know the meaning of laspapi is dat ur name or nickname
keep it up great job, the sky is just the take off point

yes, funmi is a great woman. i know her. i have been around her space many times. but i do not consider myself a friend. i am awed by her wisdom, it leaves me dumbfounded, almost intimidated.
i'm a talkative, but with funmi, i just observe. she knows life too well... i love her!

Kudos to both women! every little bit helps...

Oprah once said it would take Women to turn Africa around... and here are two examples

I actualy had a tear in my eyes reading this. I'm lost for words. If every body put in their 10 kobo, we will have a better world. Whats does what Ms Iyanda wears nd who she dates have to do with anything anyways? She is a living legend. I commend and appluad her. Great job U R doing Las. Good looking out!

thanks for appreciating Funmi.
def a great human being.
more roars to her.

I once heard in a movie that "Service is nothing to be ashamed of for God is the greatest servant of all."
Thanks for this inspiration for me to ask myself what contributions I have made to this incarnation.

As for Aunty Funmi, as will most people when they have nothing to complain about, people will harp on the insignificant things in a life of great significance. Those that know her know who she is. I am one of those who as benefited from her life...and it was not because of what she was wearing

This is so so sad...So much suffering in the world

The thing about the Nigerian condition is that everyone expects you not to care. But if you do, people begin to wonder why. They say there must be a reason why you're doing what you're doing. Ofcourse there is a reason. You care and that's what matters.

she has nice skin sha

I'm happy ppl like you are doing stuff like this...arghh the sky is the limit, may we continue to help others who are less fortunate and never cease!

How is her foundation anyway? i.e. her organisation

Oh dear, posts like this just puts things in perspective doesn't it.

I see you are awed by Miss Iyanda, more collaborations to your elbow (if that makes any iota of sense - lol)