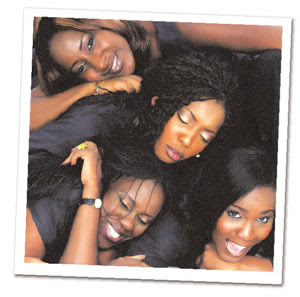 The Vagina Monologues, transcribed from hundreds of interviews with women by Eve Ensler has a primary goal, which is to stop abuse whether physical, emotional or mental, levelled against all women. It has been performed worldwide hundreds of times and has featured the likes of Glen Close, Jane Fonda, Salma Hayek, Sally Fields, Queen Latifah and thousands of other performers from all over the world. The Nigerian performances, sponsored by Hafsat Abiola-Costello's KIND (The Kudirat Abiola Initiative For Democracy) in 2006 and 2007 starred females like Joke Silva, Kate Henshaw, Omonor Imobhio, Iretiola Doyle, Elvina Ibru, Iyabode Olajumoke, Rita Dominic, Funmi Iyanda, Bose Afolabi, Teni Aofiyebi, Marie Ekpere and Azeezat.

The 2008 performance which will be adapted to feature issues that are not only universal but also African, will be directed by Wole Oguntokun. Some of you call him laspapi. There will be performances in Abuja as well as Lagos for starters, early next year. The Girl Whisperer as Artistic Director for the New Monologues? I knew there was a reason I wrote "Anatomy Of a Woman".

congrats! i hope, in ur script, the 'c' word and 'v' word will be applied judicioulsy.

have u seen TW (adesuwa onyenokwe's mag). do get a copy and read our thots on it.
congrats again!

papi, na wa o - e get anytin wey una no fit do? looking forward to hearing more about this and all your 2008 moves!

@ frances- Guess whom I'd have liked to cast in this play? Yep! You got it first time. Some day soon, frances, we'll work together.

ewooooo,
so u r saying that I cannot sing?
I am so hurt...

Congratulations on this. I have missed both years shows...So when will this be? I would love to attend this time with a few friends...

I guess after this experience, you'll have, albeit vicariously, discovered your "V" as they say.Yawn.