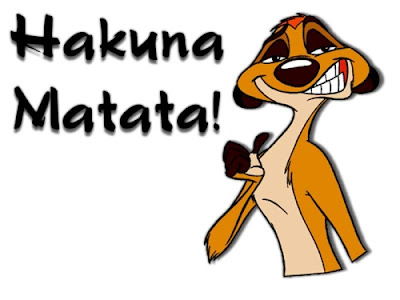 In 1980, a Kenyan Hotel band, ‘Them Mushrooms’ released that very popular song, ‘Jambo Bwana’ (Hello Mister), which had the phrase, Hakuna Matata, repeated in its refrain. In 1994, the phrase was given worldwide recognition through the movie, the Lion King, and in it, two characters, Timon and Pumbaa encourage the lion cub, Simba, to forget the worries of the past and live for the future.
All over the world, in every doctrine and creed and in most major religions, there is a matching philosophy, one that says ‘Don’t worry, be happy’, sometimes misapplied by those who might possess a disconcerting lack of ambition but always used by those who believe the ugly past should stay where it is.

There are other terms, ‘no sweat’, ‘no worries’, ‘ba wahala’ which have the same meaning. Bobby McFerrin’s famous song goes, ‘Ain’t got no cash, ain’t got no style; ain’t got no girl to make you smile...don’t worry, be happy’. The public speaker, Mike Murdoch has been credited with a line that lends weight to this world view. The line- ‘Don’t let the pain of your past, poison your future’.
There are many, the walking wounded, suffering from events earlier on in their lives, and even though they are in their thirties, forties and fifties, still bear the scars of careless statements and actions made by others when they were in their teens.

My dream girl when I was about thirteen and fourteen was called Rosemary (and here’s an eye-opener for the parents in denial reading this, your thirteen year old boy is dreaming of girls). I have no idea what she looks like now but I recall then, that I had this huge crush on her and would wave shyly sometimes when she passed. I stayed in the area of Surulere in Lagos then known as Shell Club and she, in one of the red-bricked blocks of flats off Bode Thomas Street.

One day, the greatest honour I could think of was bestowed upon me. My true love (even if she didn’t know it) invited me to her party; I’ve forgotten what the occasion was. I brought out my party outfit (at that age, you had to have a party outfit) and went along with my more socially savvy friends, the brothers Ayo and Segun Idowu. So there I was in my jeans (I suspect they were bell-bottomed) and a matching jeans waistcoat). Okay, you can laugh now, the Whisperer wasn’t born perfect, perfection came over time. So we came into this party and ayo and segun dispersed, leaving me to mingle as best as I could. I tried to be cool and unobtrusive at the same time. In my mind, Rosemary had recognized the chemistry between us and we would profess our undying love to each other. And then she spotted me, and walked from across the room with a wide smile on her face. What she said then, ranks among the ten most incredible lines I have heard till this moment, decades after. This girl who was my very heartbeat said, ‘It’s good to see you. Just wait a bit, someone your own height will come in soon.’ I wasn’t very tall as a thirteen year old and like other teens who suffered that ailment; it was a serious issue for me. But hearing my Helen of Troy say it, was a blow lesser people would never have recovered from. I managed to make it out of the party a few minutes later, without my friends and a humbled man (or boy) choose what your preference is; and went home to sleep.

Thereafter, I learnt the power of Hakuna Matata. You do not have a choice in the matter. You may be knocked down by circumstances beyond your control but you choose to stay down, roll in the mud or to get up. Those who will last the whole ten rounds in the fight will themselves to get up. Sometimes, the best revenge is living well. Hakuna matata should be your clarion cry. Be like the donkey that was thrown into a pit because his owner felt there was no use for him. People would come and throw rubbish in the pit but the donkey would shake it off, stomp on it, and rise a little higher. Someday, the donkey found the rubbish thrown into the pit had become a platform which allowed him to jump out of the pit and make his own way in life. Hakuna Matata.

Everybody is somebody’s fool. Someday, and it is inevitable if it hasn’t happened to you yet, someone will make a fool of you in the issues of the heart. This person will turn you into a blubbering child. You must remember one thing; if you do not pick yourself up, no one else can. It’s essential that we all remember, ‘It’s not who you love, it’s who loves you’.

Learn to laugh at yourself and the pain will go away. There have been other girls along the way, those who didn’t believe. Oh, but they do now, how they do now. It doesn’t matter if no one else has faith in you; the most important thing is to remember the lines of the desiderata that say you have a right to exist, to be happy, and to succeed.

Today, I cast my mind back to all those who had no faith, and I smile to myself and say, ‘if only you could see me now’. As the song goes, “Hakuna Matata! It means no worry for the rest of your days, it’s our problem-free philosophy”

I would like to wish you a future that is ruled by this philosophy, a future where you learn the ability to shake off disappointments like a duck shakes water off its back. I wish you the strength to rise after painful encounters, smile a little and say, ‘that was a mistake, but I’ll get on with my life now, being careful never to walk that path again’.

It’s a beautiful world out there in many ways. Let’s have fun in it.
Posted by laspapi at 11:10 am

Wait a minute, did you ever find out why your 'Helen of troy' said something like that? Sounds outrightly malicious!

But of course, its all in the past.

Hakuna Matata. Life is a carnival.

But Is it, really?

Thanks man, needed that....you should look up the song "If they could see me now" from SWEET CHARITY the musical ;)

Nice post! Go 'Papi! (As usual) Read this rather late but all the talk of girl-dreaming brought back some (relatively good) memories I thought I'd forgotten...

PS: How come one of your tags for this post is in Mandarin Chinese or something like that? Pardon my curiousity...

@ She- We were kids, there was no malice there even though her words dealt a near-death blow

@ N.E. - Its blogger putting a Chinese burn on me. Everytime I try to fill the box, it goes Chinese.