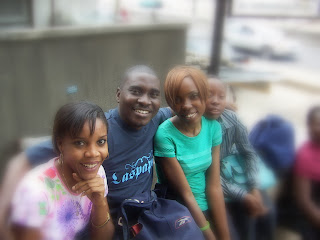 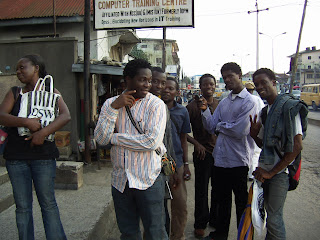 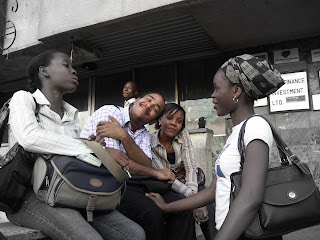 Musings of a naija artiste after rehearsals...

*Watched a Jim Iyke/Rita Dominic movie in which the scion of a rich family married a poor girl against the wishes of his family. They were happy in love, then he lost his sight in a kitchen fire accident that blinded him without scorching his features.

Then, she, who had been there for him through thick and thin, fell in love with another. Then he regained his sight. Then he found out she was cheating. Then his parents came back and said "We told you so". Then he knelt and begged for their forgiveness.

I could have cried. For wasting my own time.

*I was invited to the 80 year old Yoruba Lawn Tennis Club by a Judge of the High Court of Lagos State last night. We sat, we spoke, he's quite literary. All over the club, a grey haired cardiologist, an obstetrician, some living legend, pipe in mouth, puffing quietly, contemplating past years, thinking of the future...

Someday, I'll tell my kids, "I shared food from the same plate with a judge. Can you beat that?"


*My theory- If you want to be remembered after you're gone, write a good book.
Posted by laspapi at 1:58 pm

I really do wish I had warned you..gosh i am sorry.

don't do that to yourself again. please.i always used to feel this way after watching nigerian films so i dont.ever.

...guess it's time they remaned the club. Lagos is not made up of only Yorubas and I would hope that members are not only Yoruba's too.

I have since learnt that the things that irritate me the most are the things I need to work on.
Laspapi, if that film was really as bad as you say, write a good one.
If good scripts don't come alone, the ulgy ones will shine.

'Someday, I'll tell my kids, "I shared food from the same plate with a judge. Can you beat that?"'....i am worried...aspire for greater things like meeting Nelson Mendela( i promise ur children will be more impressed.but I am sure the jugde was impressed by u as well.......

As for your last line, here's what BENJAMIN FRANKLIN said:
"IF YOU WOULD NOT BE FORGOTTEN AS SOON AS YOU ARE DEAD AND ROTTEN, EITHER WRITE THINGS WORTH THE READING, OR DO THINGS WORTH THE WRITING." Benjamin Franklin (1706 -1790)

It's one of my favourite quotations.

@ ~mimi~ I was shell-shocked for a while, wondering how they lost the plot. How have you been, idol?

@ refined one- I don't think they should rename the club. There is a plaque at the entrance to the club inscribed with Anthony Enahoro's words eulogising YTC's retention of its cultural identity. I agree with him. The club's name was in response to imperialism, with no trace of tribalism by the original founders.

@ babawilly- you're right as to the necesity of adding one's writing to the mix to improve the mess.
ps- I have given your books to Terra. They're available in the reading room now. You might want to put them up for sale there as well. Just tell your rep to call me.

@ dramaqueen- aspire for greater things like mandela?
That made me smile. I'll tell you the story of my life someday.

I'm a lawyer, dramaqueen, called to the Nigerian bar, and for us, there is none greater than the keeper of the laws, the last bastion. That was not a man I had dinner with, it was with an establishment, a representative of the Nigerian Bench, as great as the Lord Chancellor in Britain's Highest Courts.

I was musing...my child will appreciate those who stand between us and anarchy.

@ Abuja Walkabout- Strong words by B. Franklin, but accurate. I believe that.

...Papi, It may not have any tribal connotation ,that still does not stop it from sounding IMHO a lot out of date (for the reason you give for not changing the name) in a country that is trying to see it‘s self as Nigerians first and not tribes..
.PS: Anthony Enahoro I don’t think represents or is the voice of the Hausa, Ijaw, Ibo, Efik or Delta man/woman (you get my drift) of Lagos.

Well I am going to things worth writing as soon as I figure it out.

As for the movie.
Thatz how nigerian movies go, itz always a waste of time to watch them.
But lately i saw some films that impressed me.

If you wanna be remembered in this world, do something remarkable, be an icon.
Let language use your name.
Be good at whatever you do and be consistent.

I love Nigerian movies...LOL....Abeg jare..I am sure you learnt something new....

Thanks laspapi. Will get in touch via e mail

That is why i said, u and I should make our own movies. what is wrong with u?

@ refined one- I get your drift.

@ oracle- thanks for this, oracle. I try to look at our movies with an unbiased eye, but some films make this hard.

@ uzo- I know those of you who are permanently glued to "Africa Magic" ;P

@ babawilly- It was my pleasure

@ catwalq- I love you too. See, we have to sit and talk. I have a script in progress, I think you'll love