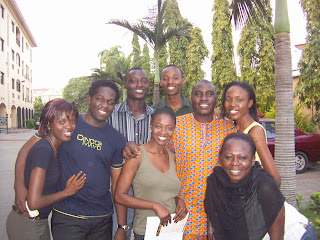 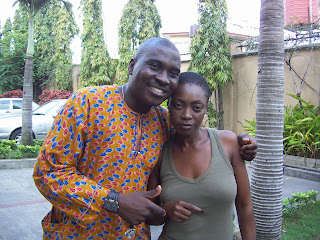 Went to the Muson Centre yesterday to see a stage production of Professor Femi Osofisan's "Midnight Blackout" as directed by Sunkanmi Adebayo.
It had the singer & actor, Yinka Davies as well as Ego (Lagbaja's former back-up singer) as part of the members of cast.

In the photos, laspapi and Yinka Davies, and then other members of my cast and crew who came to watch the show as well.
Posted by laspapi at 11:09 pm

na wah o
u u're just painting the town red.
enjoy
we should start working on our project sef so that when I arrive, we will just "drop it like it's hot" on an unsuspecting public

Thanks for sharing the photos...when you have a moment can you please also share a line or two about the 'Midnight Blackout' storyline? Thanks in advance

yeah, was it good?

I love Yinka davies and Ego!

@ uzo- it was really good, the majority of the cast and crew being U.I. Theatre Arts graduates and students.

@ omohemi- It was good, omohemi. Yinka and Ego are very cool people.