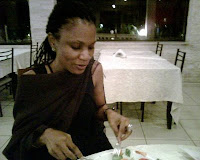 After the recording which will be aired next Wednesday, the guest for the next recording was the new Commissioner for Police in Lagos, MD Abubakar. The suave copper, one month old in his new post had to sit and be interrogated by Funmi Iyanda, Susan Eyo-Honesty (Deputy Editor in Chief of the magazine, “City People” ) and Nkechi Obi, (M.D, ISD Consult ) over allegations that his men were targeting females dressed “indecently” and men with Dreads, tatoos and ear-rings. Funmi herself, just a while back, had been stopped in her car along with a couple of our mutual friends and asked to explain why she was dressed a certain way (Read story here). and see photo of the attire in issue. The P.C. spoke extensively and he spoke for long but reassured everyone that his men who had done these things exceeded instructions given them. The directive had been to intercept females who might be accomplices to felons. He spoke of crime, the steps taken to combat it (There has been a heavy police presence in Lagos lately) and the limitations of the police.

We hope for a better country.

Ps. By the way, half the fun of the recordings of New Dawn must be the conversations we engage in after.

Pps. babawilly, I gave funmi your book.
Posted by laspapi at 12:37 am

The P.C. spoke extensively and he spoke for long but reassured everyone that his men who had done these things exceeded instructions given them.

There has been heavy military presence in PH too...in fact we know have curfews.

Have a wonderful weekend!

Apparently those police guys are doing oversyllabus. I think the commissioner coming on air to say they overstepped boundary is not enough.

The officers who overstepped their boundaries need to be brought to book and disciplined, we need a public enquiry how could they have misinterpreted the directive, where did the communication breakdown (abi I dey push am)

Laspapi, thanks jare. Hope you find time to read it. My bro said you dropped by at my mum's office to collect. Thanks.
Looking forward to meeting you guys sometime.
I hope the new Police chief will have the will to curb the excesses of his 'boys'.
Once again, thanks

re thots sent me e-mail-

"...a comedy of coincidences.
The 'police' will say; "afterall the lastest bank robbery was led by a woman (according to a newspaper report), so, they have to check these ladies that are 'improperly dressed' as they could be accessories..."
It seems to me someone (or many) are mixing up policing with defining what is morally right.
Excuse me, but, no one (and i mean, no one) is in a position to dictate that this is morally right or wrong. These are matters of opinions and can't be imposed on anyone."

@ nilla - glad the police force is finally waking up to its responsibilities. How are you, nilla?

@ 30+ sounds like you have a transcript of the interview. He actually said each divisional police post has a "human rights desk" where such matters are taken up. The problem they've had in times past according to him is the unwillingness of people to testify to the excesses of the police. He said if they found witnesses to these excesses, they'd have proper trials that might result in te sack of the officers in question where neccessary. He left NTA that day with a chap who was brought by a camera man and who claimed he had been "gun-whipped" by a policeman.

@ babawilly- my pleasure. I was glad to be of help. Hope we meet up soon.

@ rethots- I agree with you totally. Who becomes the judge of morality? A half-drunk semi-illiterate policeman?
Even the police man with a Ph.D has no business with the morality of others. Just enforce "real laws" is what we want.