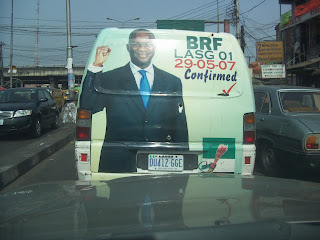 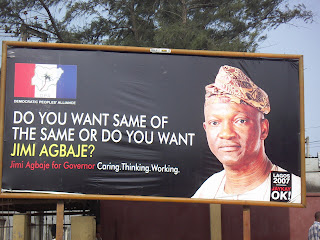 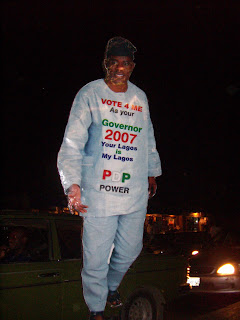 As Lagos girds itself for elections into the position of Governor in two days, its citizens prepare for an onslaught unlike any ever seen in the country.
People claim its a do-or-die affair with the incumbent Governor, Bola Tinubu,(once of the A.D. or Alliance for Democracy and now of the Action Congress or AC) swearing not to hand over to Musiliu Obanikoro (PDP), a former favourite of his and now a sworn enemy, if "Koro-ssive" wins.
B. Raji Fashola (Action Congress) a lawyer and Senior Advocate of Nigeria who has been part of Tinubu's government is the chosen heir-apparent of Tinubu.
Jimmy Agbaje is the outsider in the race but is favoured by many on account of his intelligence and far reaching policies. There's Gbajabiamila (AD or Alliance for Democracy) who's campaign buses have "Olu Omo" (Commander of Girls) written on them. This round-faced fellow must be talking of his sisters.
There's Femi Pedro (Labour Party) who is currently the Deputy Governor of Lagos State but who lacks the support of his boss which says a lot about his situation. No one seriously expects him to win.

There's also the fresh-faced Uche Ibukun Omihai of the Fresh Democratic Party, a female and one of the better known underdogs, Ladipo Johnson (NAP), whose Party Chairman, Tunji Braithwaite publicly said at a press briefing that he was supporting Fashola, a member of another party, while Ladipo was still busy campaigning. (Some detractors claim Braithwaite, once Fela Anikulapo Kuti's lawyer is now senile, but you can see their point). Braithwaite thereafter did a full turn and again pledged his loyalty to his party member, Ladipo. Ladipo's Deputy Governorship aspirant is Ladipo Dickson aka "Lado Dickson" according to the fliers. That nickname might not help his cause. Tokunbo Afikuyomi, ex-senator and ex-friend of Tinubu was in the thick of Tinubu's University of Toronto scandal supporting the Governor in his moment of trial. They soon fell apart and Afikuyomi, a relic of the times when the Yoruba race dumbly allowed some doddering old fellows choose representatives for them, left the A.D. for the ANPP. He has since reconciled with Tinubu and by implication supports Fashola's bid. There are many other irrelevant contestants in this race.

Obanikoro and Fashola are reputed to have stocked their supporters with guns and ammo and Lagosians are on their part stocking their homes with food to survive the siege. Already, there have been repeated clashes between party supporters of the top two, Fashola and 'Koro'. Agbaje claims violence is wrong and has posters that say so, but there are those who swear that some men who left carnage in their wake at Bariga are Agbaje supporters.
The Police?- Forget the Nigerian Police Farce (sic)

By the way, there are few Nigerian politicians who don't use "The Boys-The Boys" to intimidate the opposition. Even the gentleman Donald Duke, governor of Cross Rivers State, is reputed to have a private army.
I can imagine Tony Blair and David Cameron with their own party thugs clashing at Victoria Station, using guns and knives, on themselves, by-standers and anything that moves. Nigeria is still a long way from civilization. Let no one annoy me by picking up on that.

When Nigerians have elections, all the churches and mosques on the West Coast of Africa pray for peace so that there might be no chaos in Nigeria. That would cause a human flood of tens of millions all over West Africa. If you consider that Lagos alone is almost half of the population of the UK, you get the point of the prayers.

The big guns, Atiku, Yaradua, Buhari, Utomi etc haven't even done their bit and already there's so much fear in the land. My home's private security guard, Mustapha, has returned to Borno state where he is sure he will not be killed for speaking the wrong language-

As the day draws closer, let's bow our heads and pray...
Posted by laspapi at 5:01 pm

WOW na wa oh - I wish I were more into politricks (get the pun)....God help us anyway.

I agree with you on Nigerian being a long way from civilization.
Let no one annoy me by picking up on that.
I am not agreeing with because I don't want to get on your nerves. lol.

I join millions of people to pray for the best. hmm.

Wow. Scary times. So there is no such thing as political rally's - just fight me, i fight you?

I'm sure the next thing is thugs mannign the voting booths so you're forced to vote for their candidate (that's if it's not already being done). It's good that people still bother to vote.

Nigerian Politicks has always been known as the deadliest occupation so it's no wonder that all the key players have their own armies. I would be hella suprised if they didn't!

My prayers are for everyone and that they stay safe.

I get it, mona. Nigeria's a 'slightly delicate' place at this time

@ noni- rally ke? You attend a rally at your own peril here o. They've (the thugs) been manning voting booths in this country for years. We'll keep safe, noni

watched live footage of the voting process...and it made for uncomfortable viewing...all the ouright rigging....inec officials tryn to abscond with ballot boxes...a police officer slapped a reporter in full glare of voters and the cameras...cos they can and do get away with everything...candidates win most of the votes and sum other candidate comes up as the winner...see Nigeria in four years time...in the same situation...