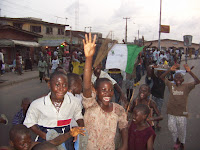 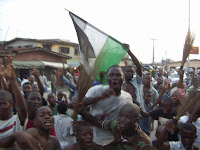 Elections have been concluded for the Governorship position in Lagos with Babatunde Raji Fashola , the Action Congress candidate and Governor Tinubu’s heir apparent running amok at the polls, trouncing all comers including the feared Musiliu Obanikoro.

The losing aspirants with Pedro as spokesman immediately called for a cancellation and termination of collations in Lagos because of ‘irregularities’.

In a related story, the Ondo State Deputy Governor made off with electoral boxes ending the collation of votes in that state. He must have seen the writing on the wall.

There can only be one winner. And for some, their day in the sun is finally over.

(In the picture, Lagosians celebrate news of the victory of Fashola. They climbed my car, and swamped me as I took pictures through the vehicle's sunroof).
Posted by laspapi at 5:30 pm

True talk- there can only be one winner. The others should suck it up, and try again next time, lol. There's no pic though, or maybe it's my computer...

only one winner oh...happy with Fashola...and Agagu must not run away with what aint his...where's the picture?i need sum laffs oh! ;-)

So Fashola is the new Govenor - let's hope he makes some good changes - and maintain the roads already!

I did not see the pic either...when you say 'made ooff with the ballot boxes' do you mean like - he pilfered them. Omigosh...that's saying a lot...isn't that even a felony, it is government property ke.
Hope the new governor will bring new and fresh ideas to make Lagos excel. Those of us overseas are still miffed that we do not get to participate in the voting process...but someone told me last night that in all likelihood our votes might not even have been counted given the shadiness of the whole process.

Thanks for the update

no pic, omosewa, my mistake. I'll sort it now.

@ vixen- can't explain the madness in Ondo State. Deputy Governor jumping into a river with the ballot box on his head and his agbada billowing behind him? Na wa! (ok, I got carried away. He probably took off in a car)

@ noni- pic's coming. Fashola had better do those roads. Tinubu had rocks thrown at him in Ajah because of his negligence in that regard.

jola- a criminal felony o! but when did that ever matter to Nigerian politicians. On Sunday, all the papers carried the pic of a man caught with a pump action rifle in a jeep. He was made to sit on the floor with his gun but he appeared unruffled. He's Alao Akala's man. Who's Akala? Governor-elect of Oyo State and yes-man to Adedibu.