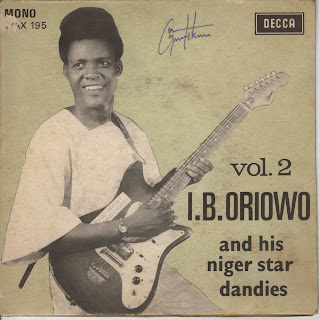 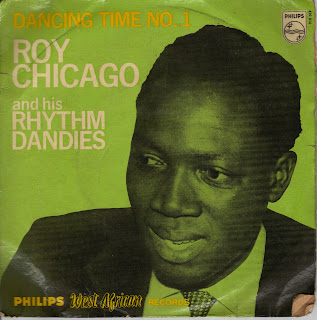 Today I went down memory lane, searching through dusty old records that belonged to my father, quite a number dating back from the 60s.
A lot of those Nigerian musicians had cult status,sang with great voices and had wonderful melodies. But they had such horrible band names...

Sir Victor Uwiaifo and his Melody Maestroes
Orlando Julius and his Modern Aces
I.K. Dairo and his Blue Spots MBE (This was Paul Dairo's father and the MBE is an honour he got from England that he made part of his band name)
King Kennytone and his Western Toppers band (later to become Top Toppers. The band leader was Kenneth Otone)
Roy Chicago and his "Abalabi Rhythm" Dandies
Dele Ojo and his Star Brothers Band
Tunde Osofisan and his Rhythm Fadakas
Tunde Western Nightingale and his band
Charles Iwegbue and his Archibogs
Ayinde Bakare and his Inner Circle Orchestra
King Josy Friday and his National Toppers Band
I.B.Oriowo and his Niger Star Dandies
Victor Olaiya and his All Stars
Booby Benson and his combo

LOL, where did they get those names from...i'm not familiar with anyone of them, except IK Dairo and Orlando Julius(shey he's the Columbia mo fe ran e singer?).I looked online for the Connie Francis song, i didnt find that one, but i listened to something else by her, she has a really nice and unique voice. Have a fantastic week Laspapi!

I had no idea who she was till today, omosewa. Trust you to do a background check. Tunde Nightingale and Roy Chicago were giants too.
ps. My older Bro says the 'Before the rain' singer was Lee Oscar (Oskar). See comments under post.
Enjoy your week too, beautiful child.

One of the favorite songs of my childhood was Taxi Driver by Bobby Benson...and it was remade again by Mandy Brown Ojugbana. I know Mr Benson passed away and I remember his Hotel Bobby on Ikorodu Rd...is it still there by the way. I also loved Salomey by IK Dairo. I think Paul Play and Dare Art should get together and do something in memory of their old men, like Natalie Cole did on the 'Unforgettable' album...wouldn't that be special!

Thanks for sharing, this brought a lot of memories.

Laspapi, lucky you. I know some of those musicians and I am not familiar with some of the others. Anyhow, I would pay a lot of money for some of those records you found...

Check out youtube and search for Victor Uwaifo. You will be amazed to find some of his music videos from way back when

Oh God, the high life in the 60s kicked ass man! I got this CD at the HMV the other day, AFRO-BABY, it has the all stars, Orlando Julius, Dr Victor Olaiya, Fela and the Africa 70,Bola Benson, Fred Fisher. Love that cd, and I love IK Dairo and his blue spots MBE, oh my goodness - Ina Ran was my summer jam, the sekere player is uber talented...MENNNN.

thanks, jola.
they've torn down Hotel Bobby now, its just a vacant lot at the moment. Its rooms had become a home for vagrants and criminals. I like the Paul Play/ Dare Alade idea. Lets hope they get it.
I liked Mandy Browns's "Broda Eko" too.

@ Count Sky- Thanks, count. I'll go check what's available. Thanks for stopping by.

@ mamarita- well done, 'marita. You know where its at. I think those CDs are available at O' Jez in Lagos too. The collections are really popular here too

Love rifling through my dad's records as well. Charles Iwegbue and the Archibogs I remember...

good one, uk. Do you think the name came from "Archibong"?

I pity your readers who have never heard of Victor Uwaifo or Olaiya. And how can your say their names in the same beath as nitwits like D'Banj and Daddy Showkey?